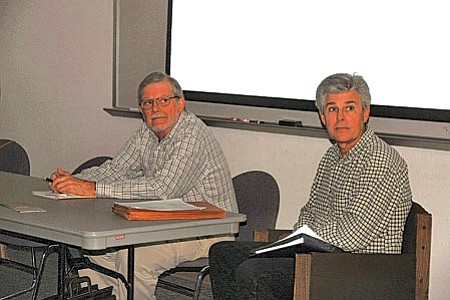 The Panel also included Bob Carabell, rebutting for the designation and Ron Volkmann speaking against the Designation.

Legislation for a National Scenic Area was loudly and overwhelmingly endorsed at the June 11, 2009 meeting of the Big Park Regional Coordinating Council (BPRCC). Council representatives voted after hearing a lively panel discussion of the issue and a lengthy follow-up question and answer period with the over-flow crowd.

Representing the primary proponents of the NSA on the panel was Steve DeVol, President of Keep Sedona Beautiful, one of several organizations strongly pushing for the legislation to become an Act of Congress.

Such an action would permanently protect 160,000 acres of National Forest Land surrounding the Sedona/Big Park area from land trades with parcels outside the region. Bob Carabell of the Village backed up DeVol with legal advice on the issue.

Ron Volkman, a local realtor, took the opposing position and Heather Provencio, Red Rock Ranger District Ranger, contributed greatly to the conversation, though required by her position to take a neutral stance.