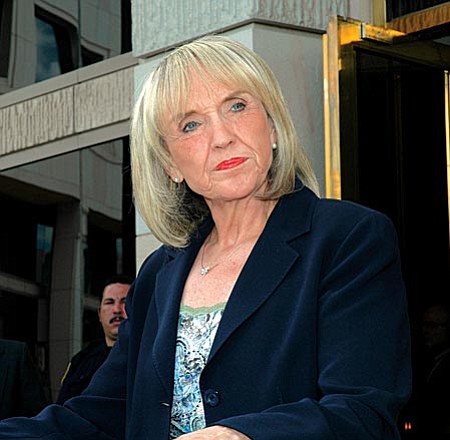 PHOENIX -- Following through with her threat, Gov. Jan Brewer vetoed pieces of the state budget Wednesday -- and then ordered state lawmakers to return to the Capitol next week to fix it.

"The legislative budget ignores my consistently expressed goals and instead incorporates devastating cuts to education, public safety, and our state's most vital health services for the frail,' the governor said in a prepared statement.

Her action came just hours after lawmakers finally wrapped up the regular session at 7:30 a.m. Wednesday, the fourth longest in state history. Shortly before leaving, they adopted the spending plan for the new fiscal year that began this morning.

Brewer said she wants lawmakers to come in at 1 p.m. Monday to adopt a budget she finds more acceptable. Her call specifically includes her demand that legislators put a measure on the November ballot asking voters to approve a 1-cent hike in the state's 5.6 percent sales tax.

The governor said the tax, which would begin Jan. 1 if approved, could raise $1 billion a year. She said the proceeds would offset some of the more than $600 million in spending cuts that remain in the budget, including $220 million reductions in state aid to education.

Aside from calling for the temporary tax hike, Brewer specifically used her power of line-item veto to eliminate the approximately $3.2 billion lawmakers set aside in basic state aid to public schools.

Brewer said, though, she wants lawmakers to spend more, not less.

But since her only authority is to take specific lines of the budget on an all-or-nothing basis, she decided not to take it, instead saying she hopes now to work with lawmakers to come up with an "acceptable level of funding.'

She also vetoed the Legislature's decision to put nearly $43.2 million in vehicle license fees into the general fund to balance the budget. Brewer wants the money to stay where it is in the Highway User Fund where it finances road construction and maintenance.

And Brewer specifically rejected lump sum reductions in funding, like a $40 million cut to be allocated among the three state universities and other reductions for the health, economic security and environmental quality departments. She called those reductions "excessive.'

Calling lawmakers into special session is the governor's prerogative.

Forcing them to adopt her plan, however, is another matter. And after a 170-day session -- at least measured that way by legislative standards -- they may not be in the mood to bargain.

Even before the regular session ended, Republican lawmakers were grumbling about the possibility.

"If she vetoes it, it's only because she's in a huff because she didn't get her sales tax increase,' complained Sen. Al Melvin, R-Tucson.

And House Speaker Kirk Adams, R-Mesa, said he doubts Brewer will be any more successful in convincing lawmakers to support the tax hike in a special session than she has been until now.

More to the point, Adams said he and Senate President Bob Burns promised Brewer only that they would try to round up the votes for the governor's request to refer the tax hike to the ballot.

He said there were no guarantees. And Adams said they lived up to their end of the bargain.

"I'm telling you, unless we would have hypnotized people, we did everything that we could to convince people to support the governor's proposal for the tax referral,' Adams said. "And short of the body snatchers returning, the votes were simply not there.'

That contention was supported by several GOP lawmakers who refused to go along.

"I didn't agree to a deal,' said Rep. Frank Antenori, R-Tucson, explaining why he did not feel compelled to accede to what Adams negotiated.

In vetoing only parts of the $8.4 billion budget, which consists of nine separate bills, Brewer found a way to keep state government operating, at least for the time being.

Some of the bills vetoed deal only with policy issues and have no direct financial impact.

More risky is her decision to veto state aid for public schools, money they use for operating expenses.

But Brewer is counting on the fact the schools don't need the cash, at least not right away. That's because state School Superintendent Tom Horne said Tuesday that his agency was told it would be getting $600 million Wednesday to distribute to schools.

If Brewer is still unable to line up the votes among member of her own Republican Party who control the House and Senate, she still has another option: seek support from Democrats.

She actually tried to do that Tuesday when, sensing she didn't have sufficient GOP votes, made what amounted to a last-minute effort to get Democrats to support the plan. She even came to the House, summoning individual Democratic lawmakers for closed-door meetings to see if she could convince them to vote for the package.

But not a single Democrat who spoke with reporters afterwards seemed inclined to go along.

First, he said, they believe the spending cuts that Brewer is willing to accept are larger than necessary. They also do not like a sales tax hike which they consider "regressive' because the poor spend a proportionately larger share of their income on the levy than the rich.

Lujan said, though, Democrats might be persuaded to at vote to send that sales tax measure to the ballot if it could be made more palatable. And that, he said, would require a rebate for those below a certain income level.

The refusal of GOP lawmakers to refer the sales tax question to the ballot had another bit of fallout: It killed the trade-off where Brewer agreed to sign a Republican plan to create a flat income tax.

Arizonans currently pay rates from less than 2.5 percent to more than 4.5 percent. The proposal would have replaced that with a single rate of 2.8 percent.

The failure of the Senate to give its final approval of the budget until early this morning resulted in a bit of administrative maneuvering.

Sen. Debbie McCune Davis, D-Phoenix, said the deadline for lawmakers to adopt a new state budget and send it to the governor actually was at midnight Tuesday night. But Senate President Bob Burns, R-Peoria, said that lawmakers were still in the session that began Tuesday morning, a move he said still made it Tuesday on the legislative calendar.

And just to make sure no one questioned that conclusion, Senate staffers turned off the clock that appears on the screen where the votes are recorded.