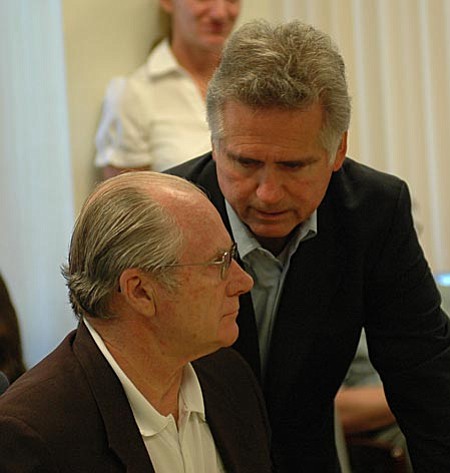 The largely party line votes in the Republican controlled House and Senate came despite a deal hammered out between the governor and GOP leaders on exactly what the package should contain.

Lawmakers did back down a bit from the spending plan they adopted last month after the Republican governor insisted it cut some programs too sharply. The new version of the $8.4 billion budget does restore state funding for some health and social programs, including Kids Care, which provides subsidized health insurance to children of the working poor.

But that was only part of Brewer's demand.

She insisted that the more than $3 billion deficit this new fiscal year can't be filled solely with spending cuts, borrowing and federal stimulus dollars. Brewer also wants to ask voters to hike the state sales tax by a penny, to 6.6 cents on every dollar of taxable items purchased, a levy that could raise $1 billion a year.

The fact that their leaders agreed to the package held no water for many Republican lawmakers.

Brewer would not answer questions about whether she beliefs the legislative leaders who negotiated the deal with her acted in bad faith by failing to produce the necessary votes.

But House Majority Leader John McComish said he and other GOP leaders did the best they can.

"The deal was we said we would go after the sales tax hike,' he said. "We couldn't get the votes.'

When Republicans balked, Brewer made what amounted to a last-minute effort to get Democrats to support the plan. She even came to the House, summoning individual Democratic lawmakers for closed-door meetings to see if she could get them to vote for the package.

But not a single Democrat who spoke with reporters afterward seemed inclined to go along.

House Minority Leader David Lujan, D-Phoenix, said the size of the cuts in the plan are much larger than Democrats believe are necessary. They also do not like a sales tax hike, which they consider "regressive' because the poor spend a proportionately larger share of their income on the levy than the rich.

Lujan said, though, Democrats might be persuaded to at least vote to send that sales tax measure to the ballot if it could be made more palatable. And that, he said, would require a rebate for those below a certain income level.

The governor's office put out the word about 6 a.m. she will act today "to continue state operations.'

But it remained unclear exactly what Brewer will do with the budget package that lacks the sales tax hike she wants.

Brewer does not need to reject the entire package, something that would guarantee certain state services would be shut down.

Instead, she needs only to exercise her power of line-item veto to remove selected items -- and then call lawmakers back to the Capitol to fix the budget and, while they're at it, make another stab at getting that tax hike referred to the ballot.

Gubernatorial press aide Paul Senseman confirmed it is "not likely" Brewer will sign the entire package.

Whether GOP lawmakers will be more receptive the second time around is unlikely.

"If she vetoes it, it's only because she s in a huff because she didn't get her sales tax increase,' complained Sen. Al Melvin, R-Tucson.

The refusal of GOP lawmakers to approve the sales tax vote had another bit of fallout: It killed the trade-off where Brewer agreed to sign a Republican plan to create a flat income tax.

Arizonans currently pay rates from less than 2.5 percent to more than 4.5 percent. The proposal would have replaced that with a single rate of 2.8 percent.

The failure of the Senate to give its final approval of the budget until early this morning resulted in a bit of administrative maneuvering.

Sen. Debbie McCune Davis, D-Phoenix, said the deadline for lawmakers to adopt a new state budget and send it to the governor actually was at midnight Tuesday night. But Senate President Bob Burns, R-Peoria, said that lawmakers were still in the session that began Tuesday morning, a move he said still made it Tuesday on the legislative calendar.

And just to make sure no one questioned that conclusion, Senate staffers turned off the clock that appears on the screen where the votes are recorded.