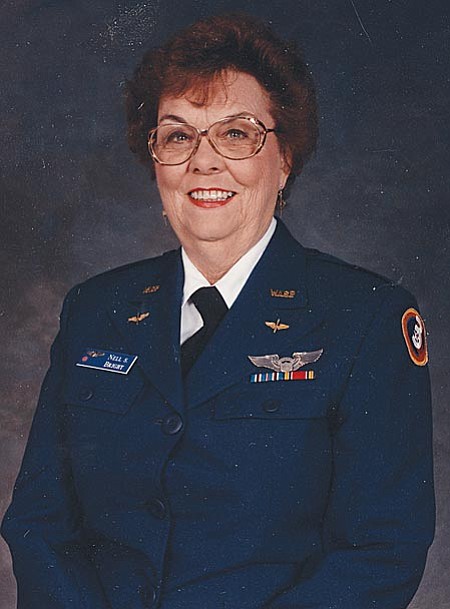 VILLAGE OF OAK CREEK - The list of those who have received the Congressional Gold Medal is a list of America's greats.

To date Congress has authorized 136 castings of the medal. George Washington received the first one.

And as soon as the current president signs the appropriate papers, the 137th recipient will be the 1,102 members of the Women Airforce Service Pilots (WASPs).

They will join the Tuskegee Airmen and the Navajo Code Talkers as the only World War II era veterans groups to be so honored. All three shared the common experience of prejudice, yet rose to serve their country in a way that took generations to appreciate.

Although stationed stateside, their often-dangerous assignments would take the lives of 38 while on active duty.

Today, 300 are still alive. Two of them live in the Verde Valley, Nell (Stevenson) Bright of Sedona and Beverly (Dietrich) Wilkinson of the Village of Oak Creek.

Like their sister WASPs they have waited all-too-long to be recognized for who they were and what they accomplished.

Nell Stevenson was a Texas native, raised in the panhandle country. Her life of flying began in a local farmer's field.

"In those days there were a lot of WWI veteran pilots making a living barnstorming the countryside. One day one landed in a nearby field and offered rides for $2. I took a ride and was hooked," Bright says.

After graduating from West Texas University at 19 years old, she took a job as a journalist in Amarillo. She also took flying lessons.

One day in 1942, while hanging around the hangar, she read a magazine article about a group of women pilots being trained by the military. She wrote to the group's founder, pioneer female aviator Jacqueline Cochran. A bus ride to Fort Worth and an interview with Cochran shortly thereafter, and she was in.

Bright began her training at Avenger Field in Sweetwater, Texas, home of the WASP, in May 1943. After graduating in November, then attending B-25 flight school, she was assigned to the Sixth Tow Target Squadron at Biggs Field, Texas.

The WASPs of her squadron were assigned to two target gliders across the sky, connected to their aircraft by a 3,000-5,000-foot steel cable. Anti-aircraft gun crews would practice by taking aim and attempting to shoot down the gliders.

In spite of the use of live ammunition, it was a low-risk mission -- most of the time.

"Most of our target-towing missions were at night," Bright says. "The gun crews had searchlights to illuminate the gliders. One night the searchlights found my plane instead.

"Soon anti-aircraft shells were bursting in front of my plane. Fortunately for me, they were bad shots. I radioed in and the explosions soon stopped. When we got back to the base we told them we had had enough and that we would come back another day."

During her year of active service, Bright flew a variety of missions.

"There were window missions where ground crews would practice tracking planes with radar, gas mission where we would lay down tear gas on troops and strafing missions where we got a chance to legally buzz ground troops," Bright says.

On one of her strafing mission, she says she buzzed a convoy twice before one soldier driving a jeep was finally forced to bail out.

"When we came around the third time he was standing along the side of the road, bare-chested, waiving his T-shirt. His jeep was wrecked and apparently he'd had enough," Bright says.

"I was at Luke Air Force Base and had met a young pilot cadet. Shortly thereafter I took my first ride in an airplane. When I decided I wanted to be a WASP I needed 35 hours of flight time to qualify, so I took a 30-day course and sent in my application."

She was assigned to Shaw Air Field outside Sumter, S.C., where her job was to test aircraft after they had been repaired and before they were turned over to the male pilots.

"The day I arrived they were shipping off the body of the girl I was replacing," Wilkinson says. "She had crashed on her approach. Apparently the repair hadn't worked. It didn't affect me a bit though. I was 19 years old. I knew it wasn't going to happen to me."

The WASPs had no official military status. They operated as a civil service branch of the government. As a result, the body of the pilot Wilkinson replaced had to be shipped home at the family's expense.

"Sometimes, when the family couldn't afford to, we'd take up a collection or Jacqueline Cochran would pay to have the body shipped home at her expense," Wilkinson says.

Less than three months after she arrived in South Carolina, the WASPs disbanded.

Wilkinson, just like Bright, took a job ferrying aircraft between Arizona, Texas and Nevada as the government began mothballing and liquidating its surplus inventory.

Among the aircraft Bright and Wilkinson flew while WASPs and thereafter were B-25 and B-26 bombers, AT-7 and AT-11 twin engine transports, P-47 "Thunderbolt," A-24 "Dauntless" and A-25 "Hell Cat" fighters.

Sometimes flight school for a particular aircraft was minimal at best.

"There were times we were simply sat in the cockpit, and were told, 'Here's the book, read it and let us know when you are ready to be checked out,'" Wilkinson says.

Wilkinson eventually joined the reserves and rose to the rank of captain. And she ended up marrying the young cadet pilot she met at Luke, Jimmy Wilkinson, shortly after they met again in Germany in 1949.

Wilkinson eventually moved to Sedona where, at the age of 85 (she is the youngest living WASP) she recently retired as a real estate agent.

Bright eventually became one of the first female stockbrokers in Phoenix and at 88 years old, only recently retired.

"We had to be in great physical condition when we were pilots. I'm sure it's part of the reason so many of us are still around," Bright says.

Their service as WASPs, they agree, was the greatest experience of their lives and made them who they are today.

"Truth be known, we had quite a lot of fun. People ask us today -- weren't you scared? Hell no. We weren't scared of anything," Bright says.

"If we were to go to the Grand Canyon, there is no way you would get us close to the edge," Wilkinson says. "We're both afraid of heights. It gives us the willies."