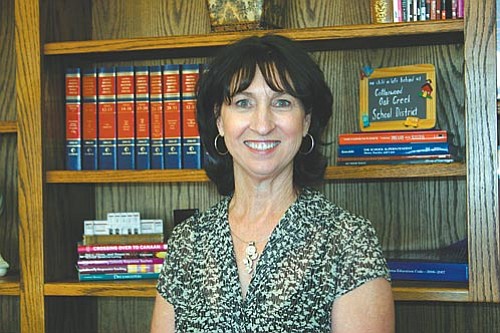 Cottonwood - Cottonwood-Oak Creek School District Superintendent Barbara U'Ren recently presented override information to the district governing board. The board has officially called for an override election on the November 3 ballot. Early ballots will go out Oct. 1.

State law allows school districts to use property taxes to go over their maintenance and operations budgets by either 5 percent or 10 percent. C-OC has a 10 percent override that the district wants to have voters continue.

Once voters approve an override, the district receives additional funding for seven years, but after five years, the district's funding decreases. During the sixth year, the amount decreases by one-third, and during the seventh year it decreases by two-thirds. Voters must authorize a continuation if the district is to avoid the decreased funding provided by the override.

According to U'Ren, the 2008-09 district budget was $13 million, including the override. She said that 88 percent of the district's budget goes to salary and benefits. The district is estimating a decrease next year from the state of $1.2 million. These reductions have already affected staffing and class size for fiscal year 2009-2010. U'Ren said the loss of the override funding would mean further and profound cuts.

By voting to continue the district's budget override taxpayers will not be increasing their own taxes. The override's tax rate is already in place.

Based on fiscal year 2008-2009, the average homeowner pays approximately 8.3 cents per day for the district's override. U'Ren says that is $2.52 a month for the additional teachers and programs the override funds provide.