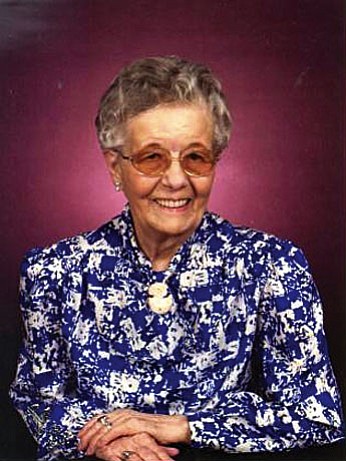 She attended schools in New York City and Denver. She served her country during World War II by working as a "Rosie the Riveter" at Davis Monthan Air Force Base in Tucson and also worked as a waitress.

She was an active member of the Ladies Auxiliary of the Veterans of Foreign Wars #7400 and held many positions including president and senior vice-president. Serving the VFW was one of her great joys and participating in its many community projects made her very proud to be a member.

Mrs. Hinds was also a member of the First Southern Baptist Church in Cottonwood.

She married William R. Hinds in 1961 in Tucson. In 1976 they moved to Cottonwood where she designed and participated in the construction of their dream home. She enjoyed gardening, serving the VFW and visiting with her many children, grandchildren and great-grandchildren. She was a source of hope and inspiration and always knew the right thing to say for those who sought her guidance. She is remembered as a loving, generous and kind woman who will be sorely missed.

She was preceded in death by an infant daughter Barbara and also by her husband William R. Hinds.

Services were held on July 10 in Cottonwood Cemetery. The Ladies Auxiliary conducted a memorial service at the VFW Post.