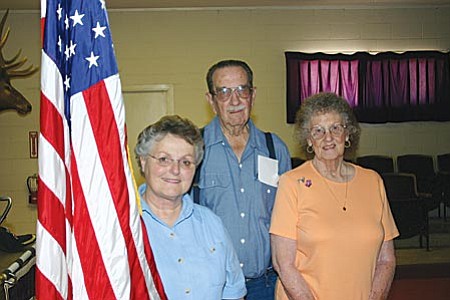 CLARKDALE - It all started April 19, 1919, when the Benevolent and Protective Order of Elks of the Jerome Lodge 1361 was formed. The lodge met on the sixth floor of the Jerome Opera House.

The first Exalted Ruler was F.E. Smith. A.E. Weidman was the first secretary, and Harry Parker served as the first treasurer.

The first motion ever made by the lodge was to set the initiation fee at $50. That motion failed for lack of a second. The next motion passed, setting that fee at $35. The annual dues were set at $12.

At the second meeting on May 2, 1919, members passed a motion requiring all applicants for membership to take a physical examination. The lodge had 14 applicants at that time.

Now, 90 years later, the Jerome Elks Lodge will celebrate its longevity Saturday. The event will feature DJ Jox in the Box playing music from the 1950s to the present. The public is invited to the celebration, and dress code is "monsoon casual." Cost is $15 per person, and that includes a New York steak barbecue dinner. Doors open at 4 p.m. and dinner will be served at 5:30.

The Elks National Foundation will provide two $250 grants for the local lodge to present to the Old Town Mission and Catholic Charities.

"When the mines closed down, they moved to Clarkdale," said Jo Krieger, Elks Lady. That location was over the old theater next to the old fire station.

In the late 1950s Rowland Wilpitz donated five acres where the present lodge is now located.

"From in town Clarkdale, they moved here," Kreiger said. The current location is 100 S. Main St.

The May 1927 issue of The Verde Elk states that the lodge membership was 449. That was a worry to the membership because it was the first time the membership had dropped since the formation of the Jerome lodge. The peak was reached in April 1926 with 451 members.

The membership now hovers around 215 members, according to Exalted Ruler Jeannette Kullman.

Minutes of the lodge show that in 1945 Brother Jovanovich shot the first legal elk in Arizona. He donated the antlers to the lodge. In 1977 Lorraine Bode delivered those antlers to a company in Californi,a where they were mounted on a fiberglass elk. That elk is now mounted on the roof of the Jerome Elks Lodge.

Since its beginning, the lodge has seen some significant changes. In February 1995, the first women were initiated into the lodge, and in 2003 Lucille Butler was elected as the first woman exalted ruler.

June 21-22, 1969, the lodge celebrated its 50th Anniversary. A golf tournament and tours of the area for the visiting Elks Ladies were held that Saturday. That night a dinner and dance was held. Michael Westcott was exalted ruler at that time.

What hasn't changed in all those years is the lodge's dedication to community service. "There's a National Elks Foundation that we support," Kullman said.

On the state level, the lodge helps support the Steele Children's Research Center. "We have one floor that we donate to, for premature babies," Kullman said.

"One major emphasis is for veterans," said Bill Allen, trustee.

The lodge also has a Clothe the Children program at Christmas. Kullman said the lodge contacts nurses at area schools to find children in need. "We take the children to Wal-Mart to shop for clothes," she said.

Among several other community projects, the lodge holds an annual Americanism essay contest for fifth through eighth graders.

"We have the drug awareness program," Kullman said. "We go to schools and give out coloring books and talk about drugs."

Members of the lodge also go to local schools each year to give every third-grade student in the Verde Valley a dictionary.