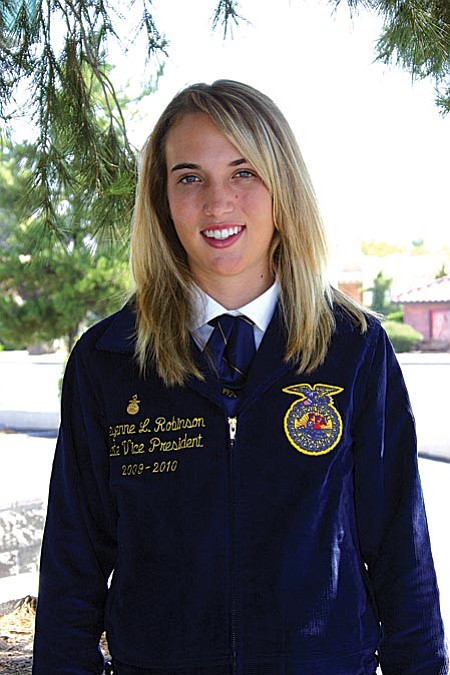 "You had to be elected," she said. "We went through a nomination committee that took three days."

The 18-year-old graduated this spring from Mingus with a 3.9 grade point average. She also graduated with 18 college credit hours that will make her a sophomore after she finishes her first semester at the University of Arizona.

Cheyenne will serve as the state FFA vice president while she attends UA this year. She will major in animal science. After college, she intends to enroll in veterinary school in either Colorado or Washington State.

She earned $11,500 in scholarships before graduation from MUHS. "I have most of my school paid for this year," she said.

She lives on an acreage in Bridgeport with her parents, Bart and Charly Robinson and her two brothers, Jeff and Samuel. Cheyenne said her mother was also a state FFA officer.

Getting elected to state office was no small accomplishment. "There were eight different rounds," she said. "The first was a one-on-one round. We met all of the committee members." Each candidate spent three minutes talking to each member of the selection committee.

The other rounds included role-playing, tests, writing exercises, and discussions of agriculture issues.

"The next day we gave our election speeches," Cheyenne said, "then found out what office we got."

Cheyenne started preparing for the election process a month and a half before school was out. "I had to schedule it around my finals and around the fair," she said.

But that wasn't the end of her success at the fair. She took part in an event called the Round Robin, in which she showed a steer, a lamb, a pig and a market goat. She won Grand Champion in that event.

At Mingus, Cheyenne was in FFA and agriculture classes for four years. She was treasurer, vice president and reporter for FFA at Mingus.

She said that FFA helped build her confidence and self-worth. "I realized that through the ag classes that I learned skills that make me more employable."

Cheyenne says there were other people involved in her high school success. "I thank my family and my advisors who helped me realize where I want to go in life," she said.