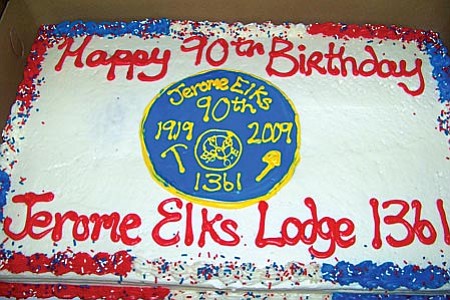 107 members of the Benevolent protective Order of the Elks Lodge 1361, spouses and friends attended gathered Saturday for the celebration of the Lodge's 90th Anniversary, originally formed in the Jerome Opera House in 1919. The festivities, overseen by Exalted Ruler Jeanette Kullman, were attended by Arizona Elks Association President Leland R. Schwein and his wife Sunday as well as members from the Elks Lodges from Surprise, Prescott, Chino Valley and Sedona. After a New York barbecue steak dinner, the Lodge presented grants of $250 each to the Old Town Mission and to the Catholic Charities. Kullman said a good time was had by all and members danced until 10 p.m. to the music of DJ Jox in the Box.