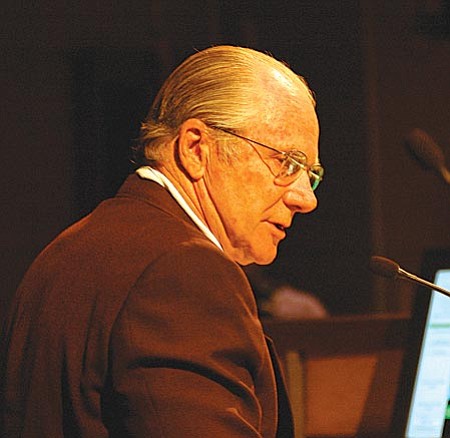 Photo by Howard Fischer, Capitol Media Services Senate President Bob Burns, R-Peoria, said Monday there needs to be enough in a new budget package that a majority of Republicans want to convince them to vote for the governor's demand for a temporary tax hike, something many of them do not.

PHOENIX -- Republican legislative leaders are offering a package of budget "reforms' in hopes of buying the votes from their members to send the question of a sales tax hike to voters.

Senate President Bob Burns, R-Peoria, said Monday there needs to be enough in a new budget package that a majority of Republicans want to convince them to vote for the governor's demand for a temporary tax hike, something many of them do not.

Burns said that may include putting another measure on the ballot, this one asking voters to give lawmakers the power to suspend spending mandated by previously approved ballot measures in times when there is a shortage.

Also on that list of offerings to line up GOP support is permanent -- and immediate -- repeal of the state property tax.

Burns said Republicans want the levy, suspended for three years in 2006, to go away forever.

And any package likely would have to include loosening regulation on business.

But even that may leave Burns without the 16 votes he needs to put the proposed sales tax hike on the November ballot. Several GOP senators, including Majority Whip Pamela Gorman, R-Anthem, said they will not support any tax hike -- or even send the question of a temporary one-cent hike in the state sales tax to the ballot.

Gorman said the election would not be fair.

"I'm not sure if you put a ballot question out there that says, 'Don't you want to pay teachers more,' 'Don't you want to pay firemen more,' whoever that they name associated with it, I think that voters think, 'Sure, I'd like to pay them more,' ' Gorman explained. "They don't recognize what that does to our ability to attract employers to our state, which ultimately erodes our economy.'

If Burns and House Speaker Kirk Adams, R-Mesa, cannot get the support within their own caucuses, they would have to go to the Democrats to get the necessary votes. And that empowers Senate Minority Leader Jorge Garcia, D-Tucson, and David Lujan, his House counterpart, to insist on something more to their liking.

Time is running out: Legislators need to approve sending the measure to voters by the end of the week to meet the statutory timelines for a Nov. 3 vote.

In the meantime, the budget for the current fiscal year is running $3.4 billion in the red.

That is partly due to the lack of an agreement on new revenues and partly due to Brewer's use of her veto pen earlier this month to strike some of the savings in the original Republican budget.

Brewer hopes to use those vetoes as leverage to get a package she likes better -- including referring the sales tax to voters.

Burns, who met behind closed doors Monday with Republican legislators, said he is aiming to have a deal of some sort by Wednesday, with or without Democratic support.

At the same time, Gov. Jan Brewer is pushing Democratic lawmakers to support sending the sales tax hike to the ballot.

So far the Democrats have not embraced the plan, arguing that those at the bottom of the income ladder are hit disproportionately harder by hiking the tax rate from 5.6 cents on each dollar to 6.6 cents than those earning more.

Lujan said Democrats would consider providing the necessary votes, but only if the list of items taxed is expanded to include services that now are exempt, ranging from haircuts and auto repairs to accounting and legal help.

But gubernatorial press aide Paul Senseman said the Democrats are off base in their beliefs.

"Arizona's sales tax structure is not regressive because it does not tax food or medicine,' he said. Brewer also has been cool to an expanded tax base, even one that lowers the tax rate, amid fears voters would reject such a complex change.

Senseman also said Democrats have supported higher sales taxes in the past, including last year when many of them backed a ballot measure for a one-cent hike for new transit needs. That measure, however, never went to voters because there were insufficient signatures on petitions.

But Lujan said it's going to take more than comments from Brewer to get Democrats on board.

"If the governor wants to talk about her referral for the sales tax, include us in negotiations,' he said. "That's part of negotiations, to have a give and take.'

Garcia said there have been talks between Democratic and Republican legislative leaders.

But he said no one from the GOP majority has said exactly what they are offering Democrats for their votes. And Garcia said he has no specific laundry list of demands.