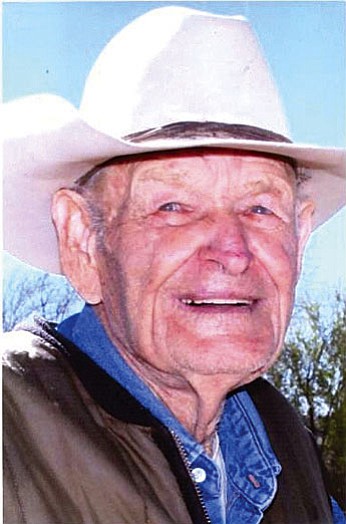 Mr. Lacey lived his entire life in Arizona. His formal education on went to grade three, and at a young age he began working as a cowboy and ranch hand on the Waters Ranch in Rimrock, AZ. He also worked as a heavy equipment operator in the Verde Valley.

Mr. Lacey liked hunting, fishing, gardening but the raising of and working with cattle and horses always remained his favorite activity.

Wil did his cowboying around the Verde Valley working mostly for Jim and Hank Wingfield. During the 1940's Wil worked on the Walters Cattle Ranch in Rimrock (where Lake Montezuma is today) under Port Parker.

Mr. Lacey will always be remembered by his family as a loving husband, father, grandfather, great grandfather and great-great grandfather. He was preceded in death by his wife Esther Jean (Strange) Lacey and two sons: Wilford Stephen and Craig Wesley Lacey..

A visitation will be held on Friday, July 31st at 9:00 AM followed by a funeral service at 9:30 AM at the Westcott Funeral Home located at 631 S. First Street in Camp Verde. Burial will follow at Middle Verde Cemetery.

Information was given by the family.