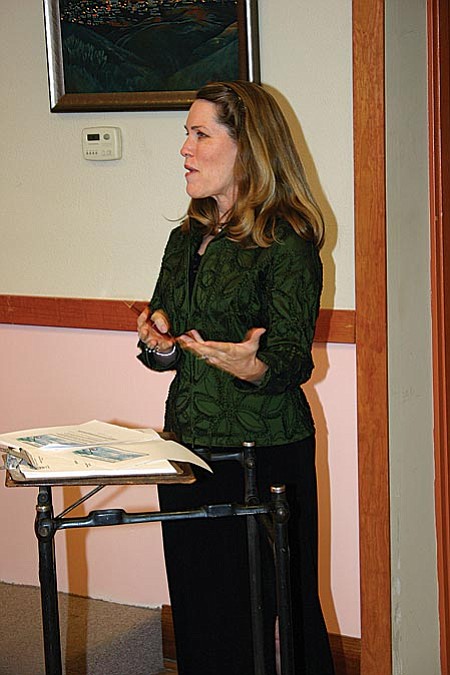 VVN/Philip Wright Jodie Filardo, economic planner for Sedona, presented an overview of how the Verde Valley Broadband Cooperative would help bring high-speed Internet to the Verde Valley. Filardo and Sherry Bailey, community development director for Clarkdale, made the presentation to the Jerome Town Council Tuesday night.

JEROME -- Broadband technology may be one of the keys to economic development throughout the Verde Valley.

That was the message delivered Tuesday night by two representatives of the Verde Valley Broadband Cooperative.

In urban areas, such as Phoenix, speeds as high as 20 Mbps are available. "We aren't even close," Filardo said.

The Verde Valley Broadband Cooperative wants to use the power of a cooperative to bring "valley wide, affordable, continuous and reliable service availability," according to Filardo. "We'd also like local control of our facilities," she said.

Filardo and Bailey both explained that cooperatives have been very successful in the United States, especially in bringing electricity to rural areas that the utility companies didn't see as being profitable.

"The State of Maryland has a (broadband) cooperative for their rural areas," Bailey said. "And it has been successful for five years. They had a profit at the end of the third year."

The Verde Valley is ripe for a cooperative because it has 60,000 customers compared with the 6 million customers in the Phoenix metropolitan area. She said the cooperative structure of serving an area actually returns profits to member customers through lower prices. Cooperatives have proven to be sustainable.

"We have a vast region," Filardo said. "We want to open it up to the entire Verde Valley."

The main benefits provided through the VVBC are seen as establishing partnerships between public and private sectors to promote development through technology. Affordable Internet for all users - business, public, residential, educational and industrial - is one of the main objectives of the VVBC.

Filardo said the vision of the VVBC is to provide "world-leading broadband telecommunications for the entire Verde Valley.

"To drive economic development through integrated, robust, and affordable high-speed broadband services through the creation of a local, member-driven organization and the network that goes with that," Filardo said.

The VVBC's immediate plans include community outreach to spread the word and gather supporters and partners. A strategic plan for collaboration with Verde Valley participants will be developed starting with a public meeting at 10 a.m. June 15 in Room M-137 of the Clarkdale campus of Yavapai College.

Finding money will be one of the biggest goals faced by the cooperative as it forms and grows. "We are looking to put together a grant request," Filardo said.

Bailey said the cooperative is researching how to reach some of the federal stimulus money.

For now, the fledgling cooperative needs participants for technical support, public outreach and grant writing. The best way to find out more or to get involved is to attend the 10 a.m. meeting June 15 in Room M-137 at Yavapai College.