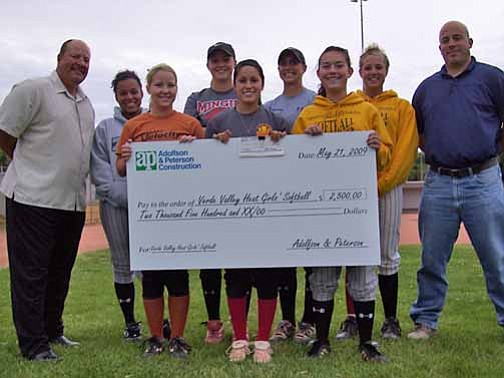 COTTONWOOD -- Buzzing ... that's the sound you can hear on summer nights at Riverfront park. Softball fields lit up with "buzzing" lights. To some, they call this place home.

Girl's Fast Pitch Softball is back in full swing. The heat of summer combined with the smell of fresh cut outfield grass is something that is hard to describe. The combination causes some people to want to relax, sit back and watch the game. But for some, these sounds and smells cause a whole lot more. The desire to play the game.

For the past five years, the Verde Valley Heat traveling softball team has been traveling around the state of Arizona and beyond to compete in Fast pitch tournaments. Although the goal of the team was originally to help build a stronger high school program, this program has grown into something much bigger and stronger.

Local players out of Mingus and Sedona high schools, along with Prescott and Bradshaw Mountain high players, combine to form a Northern Arizona All Star team. The Heat has managed to build an extremely strong team.

"We look to play at the highest level of competition available." said Head Coach John Brown.

Managing a traveling softball team can be extremely expensive. The purpose of the program is to travel to as many tournaments as possible and allow the players to showcase their talents to college recruiters. Last season the team traveled to over 15 events and placed in the top three of every tournament they competed in. This includes the TCS Nationals in Denver last summer. This accomplishment led to the recruiting of every senior on the squad to play in college this fall.

"That's why we are doing this." said assistant coach Jody Fanning. "These kids have talent and they deserve to be showcased."

Last season the team raised money and depended on the parents to fund the tournaments. With current economic conditions, the team feared it would not be able to compete this summer. However, thanks to the extreme generosity of Adolfson & Peterson Construction Company, the team is in full swing and headed to a tournament nearly every weekend this summer.

Driven by the help of John C. Barry, Senior Project Superintendent, the construction firm donated $2,500 to the club to help pay for equipment and tournaments.

"I can't begin to explain how grateful my team and I are," said coach Brown. "These guys have made it possible for these girls to realize their goals and dreams. Every player in our program wants to play ball in college. In order for this to be possible, they have to be seen. Thanks to AP Construction, we can make this happen."

Barry was on site to deliver the funds in form of an oversized check at Tuesday's practice.

"The kids were extremely excited and the giant check made it even better," said coach Brown.

The Heat travels to Phoenix this weekend to mix it up with 10 other top-notch teams in a tournament at Rose Mofford complex.

Games began at 5 p.m. on Saturday and continued through the evening. Bracket play begins this morning at 10:45 a.m.

Following a couple of weekends off, the team will travel back to Phoenix to play in the ASA State Championships before headed off to Park City, Utah to compete against the best in the Nation in the TCS World Series from July 20-25.