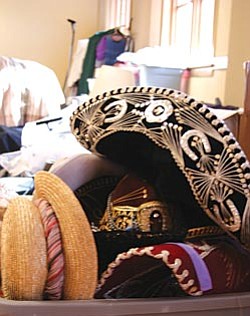 VVN/Raquel Hendrickson<br> Costumes from Verde Valley Theatre are stacked and stored in the Grand Theater on Main Street in Clarkdale. Plans are to eventually turn the historic building into a performance hall, but for now it is used for VVT storage and workspace.

Mary Guaraldi felt like her professional theater company was just starting to get ahead of the curve. Robyn Prudhomme-Bauer had moved into the leadership role for an amateur troupe packed with promise.

That, of course, is when it happened.

Theater, perhaps more than any other performance form, is filled with the potential for the unexpected. Good theater often surprises that audience; and sometimes the audience surprises the theater.

What is always expected in any theater, great or small, is a lack of money. Yet, when that issue becomes so profound it makes a lie of the old chestnut "the show must go on," the whole theater crowd trembles a bit.

As the economy has sunk, support for the arts in all its forms has melted away. Even on the level of local theater, we're talking thousands of dollars down.

The bottom fell out of sponsorship for the well-regarded Shakespeare Sedona, forcing it into hiatus this year. That caused some gasps and came on the heels of the Sedona Jazz on the Rocks Festival also calling off its 2009 season.

The tragicomedy that is always life in the theater has turned into a thriller called "Will We Make It?"

Even long-standing companies have to rethink how they do business in the new economy. The 37-year-old Theatrikos Theatre Company in Flagstaff has to peddle hard to find new ways to keep the doors open and the lights on.

"We have so much room for improvement in marketing," said Becky Daggett, president of the Board of Directors (and sometime cast member) for Theatrikos.

For Guaraldi's Canyon Moon Theatre, the financial upheaval meant again finding new avenues for both fund-raising and keeping the name in the public consciousness.

The professional theater, housed in the outlets mall in the Village of Oak Creek, has been providing top-notch entertainment for more than 10 years. Given the nature of the business, it has always been a struggle, but this economy has been a beast.

With $5,000 a month in rent plus utilities, CMT has real overhead before paying cast and crew. It has caused an unpredictable season and frayed nerves.

"In everything there is a richness," Guaraldi said. "People have to have something when times are tough. Every time I get discouraged something happens."

What Canyon Moon does have is a dedicated board of directors and patrons who understand the value of regional theater. For them, theater is a love.

"It's food for the soul, and that is really important to quality of life," Guaraldi said.

So they are working on broadening their subscriber base and calling on more volunteers while continuing to offer the expected programs, like this July's theater workshops for children and teens. Scholarship funding is an important part of that outreach.

CMT also has a Ritzy Rummage Sale, movie nights to bring out the community and, during the past year, has partnered with Marketplace Cafe; in presenting dinner-theater murder mysteries, bringing cheeky entertainment to the tableside.

"It takes a community," Guaraldi said.

She sees theater as an opportunity to help people get through their troubles, just as the arts historically always have.

"People want to laugh," she said. "We try to schedule comedies with dramatic undercurrent."

Verde Valley Theatre, too, found that bright and familiar were desired by audiences. Prudhomme-Bauer, the president of the Board of Directors, said the community theater felt the economic hit last year.

"We had lower than expected attendance, and we could definitely see where the economy went bad. Theater, music, concerts - they were all affected by that," she said.

But they are holding steady. This spring, a Broadway revue proved to be a big hit, and a staging of Steel Magnolias drew a strong audience. The nonprofessional theater that calls Clarkdale home is getting by even as sponsors and underwriters, even the big corporations, find expendable money harder to come by. Grants are harder to get, too.

"You just continue to try and do the best you can," Prudhomme-Bauer said.

That includes forming long-term relationships with those big corporations as well as small businesses. Help does not come just in funding but in service and labor, like playbills, building sets, lighting, soundwork, costumes and promotion. And even though the cast is unpaid, she said it is still a "pretty hefty commitment" of seven to eight weeks of rehearsal and nine performances. Time is money, as they say.

Though having no theater background (friend Edgar Ball got her involved), Prudhomme-Bauer has contributed elbow grease like everyone else, building sets and whatnot.

"I'm running a board that is committed to the organization and wants to see it grow," she said.

VVT has been building relationships with Mingus Union High School's art department as well as Yavapai College. "The more the merrier," Prudhomme-Bauer said.

Verde Valley Theatre has schedule three productions for next season, including the musical Little Shop of Horrors. With access to nearly a thousand works, they try to find a balance of what the community wants and what can be staged at Clark Memorial Clubhouse.

"Live theater is one of many parts of the whole cultural scene," Prudhomme-Bauer said. "As much as we need visual arts we need performance arts, and we have a good mix in the Verde Valley."

The VVT was gifted the old Grand Theater on Clarkdale's Main Street, but it will be a long, long time before the troupe can actually afford to use it as a performance hall again. Much needs to be done to transform it back into a theater, but in the meanwhile it is used for storage of props and costumes and as workspace.

For many theaters, the state budge threat to the Arizona Commission on the Arts is causing a general nervousness. "A significant portion of our budget comes through the Commission," Daggett said.

But even before the current financial difficulties, Theatrikos had some upgrading to do for community awareness.

"We did not have a very robust system for asking for money before," Daggett said.

Now with a board that has grown to 15 people, including marketing-minded business people, the theater has new avenues. That includes an Underwriters Reception on the final day of dress rehearsals, during which sponsors are invited to come in and hear the benefits of supporting the theater while getting a first-look at the latest production.

Also for the first time, Theatrikos has a Marketing Committee, "refining some new things" for each show. "And we have to do even more," Daggett said. That includes building a stronger relationship with Northern Arizona University with such productions as Town & Gown (this year it's The Odd Couple starting July 10).

Theatrikos is blessed with a strong core of volunteers. Including the actors, Daggett estimates more than 60 volunteers involved in all aspects. That is an area, too, where Theatrikos wants to grow, to at the very least prevent burnout in the ranks.

She would like to have a way of tracking community opinion and where their audience is coming from. When a show or a workshop is not supported, it leaves the theater in a quandary and trying to figure out why.

Registration for the summer kids program, TheatriKIDS, declined this year, for example. Daggett said they did not know if it was because the founder of the program is no longer as involved or if families are not as willing to pay the fee this year.

Though Theatrikos' Shakespeare production Comedy of Errors "sold really well," other shows had a slow start.

And ticket sales do not float the boat for any theater. "Something a lot of people don't understand is that ticket sales account for a little under 50 percent of our budget," Daggett said. "We can't survive with just ticket sales."

For all of the talk about money and anxiety over state budget cuts, theater continues to cast a spell on those involved.

"It's an important vehicle for storytelling among a community of people, whether they are together for two hours or in the broader community," Daggett said. "Storytelling is important to who we are, in our exploring and developing empathy for others."

She realized the impact of theater when she was in a musical comedy and was thinking it was all so frivolous and she should be working in a soup kitchen or something else meaningful. "Then I would be on that stage and see people so happy," she said. Hearing audience members share their experiences and reaction made her realize how worthwhile theater can be.

"I think theater's really magical," Daggett said. "It's where I really feel like myself, and I've discovered things about myself."

Yet, magic has its cost.

How and if live theaters survive the drama of financial forces on a shoestring budget could be an indication of the economy and culture around them.