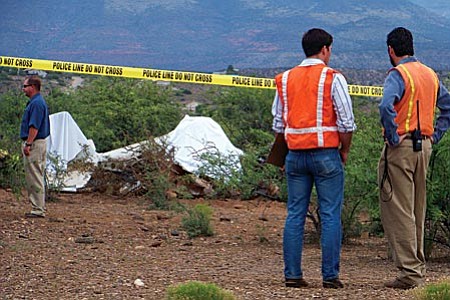 COTTONWOOD -- A single-engine plane crashed into undeveloped scrub northeast of the flight path of the Cottonwood Airport Tuesday. Two men from Cottonwood aboard the plane were killed.

Witnesses reported that the plane was flying erratically before it went down, according to Cottonwood sergeant and police spokesman Gary Eisenga, who made a wave-like motion with his hand.

Cottonwood Fire Chief Mike Casson said there was not much left of the cockpit after the 8:30 a.m. crash. The plane went down nose-first at a sharp angle, he believed.

Police draped the plane in cloth apparently to screen its identity until next of kin are notified.

Two diameters of police tape kept all but police, fire and other city officials at a distance.

Police vehicles lined SR 89A south of the crash site, and fire units filled the end of Ocotillo Street in Verde Heights.

The FAA and NTSB were called to investigate the scene.

The plane was on a course nearly identical to that of a small hand-made experimental plane flown by a Prescott Valley man three months ago. That small plane crash-landed on its wheels with moderate damage after losing power. Kenneth Knowles of Prescott Valley walked away from his maiden flight.