King Woolsey in the Verde
People, Places & Past 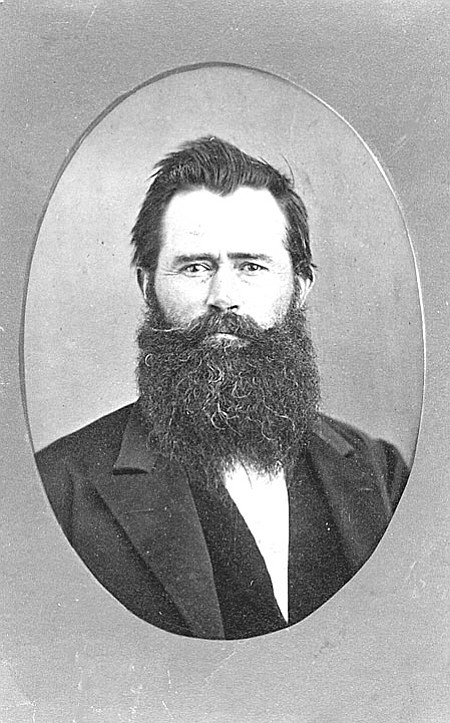 King S. Woolsey’s four trips to the Verde Valley in 1864 eventually led to the valley’s settlement. Named many of the streams in the central Arizona along with numerous landmarks. After serving five times in the Arizona Territorial Legislature, twice as speaker, he died of a presumed heart ailment in 1879 at the age of 47, one of Arizona’s wealthiest and most prominent citizens. Photo courtesy Sharlot Hall Museum

King Woolsey hated Indians long before they stole his cattle.

Having worked as a teamster in the early 1860s, a time when the Indians still held sway over much of what would one day become Arizona, Woolsey was accustomed to life in Indian country.

His life among the Indians, whose raids often brought them to his first ranch at Agua Caliente on the Gila River, led him to once tell Gen. James H. Carlton, "I fight on the broad platform of extermination."

To be precise, Woolsey didn't hate all Indians. He had two children by an Indian "wife," was best friends with the Maricopa war leader and often employed the services of Pima and Maricopa in his fights.

Woolsey's hatred of Indians was centered on the Apache and Yavapai of central Arizona.

As the story goes he killed his first Indian while hauling freight, shortly after arriving in Arizona in 1861. Woolsey hung the dead Indian from a mesquite tree, where it remained for three years as a reminder to others.

In 1863 he came north from the Gila with the Walker party, the group of prospectors that discovered gold near Prescott.

Woolsey never struck it rich, despite working numerous claims. But he did decide to stay.

It was from the ranch he built on the banks of the Agua Fria River, in what is now the town of Dewey-Humbolt, that Indian raiders stole 33 head of his cattle on the night of Jan. 4, 1864.

And it was from his subsequent attempt to recover his cattle and kill those responsible, that he became the first resident of the Arizona Territory to cross the Verde River.

From the river's discovery by the Spanish explorer Antonio de Espejo, to Woolsey's first visit, there were only six recorded visits to the Verde River -- three by Spaniards between 1583 and 1604 and three by American beaver trappers between 1826 and 1844.

Woolsey would almost equal that total, visiting the Verde four times in the first eight months of 1864.

The primary reason for the river's isolation was the very reason Woolsey went there -- it was the homeland of the Yavapai and Apache.

Their inhospitable reputation, at least as far as the white invaders was concerned, made it a place you did not go unless you went in force.

A journey of retribution

On the same evening Woolsey's Agua Fria ranch was raided, 28 mules and horses were stolen from the ranch of Abraham Peeples to the west. In a communiqué written just days before, the commander at Fort Whipple estimated an additional 150 animals had been stolen in the preceding weeks.

On or about Jan. 9, 1864, Woolsey led a group of 18 to 60 (depending on the account) "miners, ranchers, and traders...nearly all of whom had suffered more or less from the Indians," on a journey into the unknown.

One of the party, Daniel Ellis Conner, reported they went 100 miles straight east, but it is believed they in fact went south on the Agua Fria, traveled through Black Canyon and then headed east. Either way, they arrived on the lower Verde River on or about Jan. 18.

There they established a defensive fortification on the river they named Fort Badger, while four of the party went south for food and to summon help from Woolsey's allies, the Pima and Maricopa.

Before returning to his ranch in early February, Woolsey's party and their allies killed 24 Apache in Fish Creek Canyon near modern day Miami, Ariz., after inviting them to a "friendly" parlay.

The incident and the location became known as "Bloody Tanks.' It would turn Woolsey into a hero among the Anglos carving a new home out of the Apache and Yavapai homelands.

Visiting with the governor

No sooner had Woolsey returned to his ranch than newly appointed Territorial Gov. John Goodwin called upon him to join a reconnaissance of the Verde River and south to the Salt River.

The stated intention of Gov. Goodwin's trip was to find a "more suitable place for the permanent location of Fort Whipple, the development of the mineral and agricultural resources of the country, and on the part of the citizen's designing to accompany the party, the punishment of the Indians that had been committing the depredations."

On Feb. 21, 84 dignitaries, miners and soldiers headed east for the San Francisco River, as the Verde was known at the time.

Joseph Pratt Allyn, a territorial judge who left a detailed account of the trip, said the expedition was led by two of Arizona's most experienced mountain men, Joseph Walker and Pauline Weaver. For all their experiences, neither had been to the Verde.

Instead of taking Copper Canyon, or one of the more accessible routes into the valley, the party entered what is believed to have been Chasm Creek, 10 miles south of present day Camp Verde. Goodwin called the rugged and treacherous drainage "Cascade Canyon."

Goodwin's party would eventually travel upstream as far as Oak Creek, before descending the river to its confluence with the Salt and on to the Pima villages. Woolsey, however, was not among them.

No sooner was he camped on the Verde than two Mexican boys arrived to inform him that a band of 50 to 60 Indians had raided his ranch, this time stripping him of all but three oxen.

After attacking an Indian camp at a place he called "Squaw Canyon," Woolsey descended into the Verde by way of Copper Canyon, a drainage noted as having a "fair copper lode" and called "Canyon Diablo" in expedition member Henry Clinton's account

The party crossed the Verde and headed up West Clear Creek before crossing over to Fossil Creek. They returned to the Verde in a northerly trending direction via Beaver Creek.

Clinton's account of the trip is the first ever mention of Montezuma Well, so named because of the common belief that the ruins they had discovered scattered up and down the Verde River were of Aztec origin.

One last look around

Woolsey returned to the Verde for the fourth and final time in June 1864, by which time the Indians had apparently had enough of him. Killings were fewer and farther between. The party of 93 men spent most of their time prospecting and exploring.

Woolsey's personal report of the 83-day expedition states they descended "Copper canyon" and headed up West Clear Creek before dividing. A group of about 60 went on to Tonto Basin to look for Indians to kill while the rest traveled south with the pack train in search of a route through the mountains.

The two parties rendezvoused on East Verde before turning east and taking Tonto Creek south to its confluence with the Salt River. He would eventually travel as far south as the San Carlos River before returning by way of Tonto Creek and the East Verde to the Verde River.

Life after the Verde

He partnered with Goodwin and Territorial Secretary Richard McCormick in several unsuccessful mining ventures. In June 1867, Woolsey sold his ranch to his creditors and returned to his Agua Caliente Ranch on the Gila.

He served in the Territorial Legislature five times, twice being elected speaker. In 1878 he ran unsuccessfully for Congress as an independent.

He eventually became one of the state's richest men from ranching and real estate in the Phoenix area. He died suddenly on June 20, 1879, at the age of 47, considered by some to be the most prominent and respected man in the territory.

His legacy to the Verde Valley not only lives on through the accounts of his four trips, but through numerous place names scattered about the country he explored.

He is credited with bestowing the names of Sycamore Creek, Pinal Creek, Tonto Creek and the East Verde River along with numerous other landmarks.

His obituary printed in Prescott's Arizona Journal Miner on July 4, 1879 states, "He named many of the streams in Northern Arizona, among which we remember Lynx and Turkey Creeks, the Verde, Clear Creek, etc."

There is little doubt that the information gained from his trips is what brought the first settlers here five months after his return from the last expedition. There is also little doubt that his reports were the source of the repeated warnings they were given not to come here at all.

After all, the Verde Valley was still Indian country.