The Greatest Hardship: Pioneer cemeteries tell another side of the story 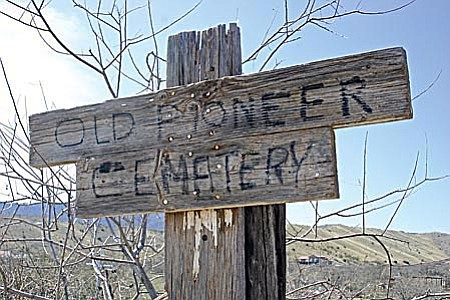 Old Pioneer Cemetery in Clarkdale is marked with this weathered sign at one corner of the property. VVN/Philip Wright

Aqui Yalen Los Restos De Francisco Luna (Augustine Luna) was born in Sonora, Mexico in 1872. He died in Clarkdale in 1929.

Augustine's grandson, Robert Luna Miramon of Phoenix, had fastened his name and phone number to the bottom of a copper pipe beside his grandfather's grave in The Old Pioneer Cemetery on Jerome's property in Clarkdale.

"He used to drive a coach from Tucson to Clarkdale," Miramon said. "The Apaches stopped them on the road one day. He had some officials of the smelter with him."

It was, no doubt, a dangerous encounter. "He knew some of the Apaches by name," Miramon said.

Because Augustine was known to the Apaches, a gift of tobacco allowed the coach and its occupants to continue. Miramon said the smelter officials were so grateful to his grandfather that they offered him a job if he wanted. He accepted.

I've long been interested in pioneer cemeteries such as the one on Minerich Road just off of the Old Jerome Highway. History teaches us about the spirit of those pioneers who settled the West. But it is in these cemeteries that we learn what truly must have been the worst hardship faced by those brave souls.

About 12 years ago I visited a pioneer cemetery on Sheldon Avenue in Prescott. The cemetery was established in 1863.

I walked around reading headstones and making some notes. Ada Peat, who was born in 1845, lived to be 80. But for every 80-year-old in that cemetery, there were a dozen children.

Angelita Silva died two days after her third birthday. She must have broken her father's heart.

Robert Abbott Mahony's grave was identified with a homemade marker and bordered with a rusty iron fence. He died in August of 1888 at the age of 1 and a half years. But he outlived many pioneer children.

Wilma Smythe and Dudley Baldwin both lived about seven months.

The headstones told that just as many people died in their 20s as in their 40s. And the inscriptions told that losing a loved one in the 1800s was no easier than it is now, no matter how often it happened.

In the Old Pioneer Cemetery in Clarkdale, I saw that Alicia Lara was born in September of 1937 and died little more than a month later. Myrtle Griffin was born in 1919 and lived only three years.

The Cottonwood Cemetery on Main Street is a modern cemetery but it also tells the story that death was an always present burden for the earliest settlers. William Mooney's headstone doesn't say when he died, but it does say he was 63 years old and was born in New York and died in Arizona Territory.

George Pierce was the son of Fred and Anola Smythe, and he died June 3, 1906, at the age of 7 months and 12 days. The inscription on his headstone reads: "Our Darling: We miss the bright eyes of our darling child, and the sweet, rosy lips that so oft on us smiled."

Maryln Dollie Davenport died July 24, 1933. Her gravestone says she was "Age 4 ½ hours." Another headstone tells that "Our Darling Baby" Velma Farrow died when she was only 6 months old.

Sadie Carrier was born in 1885 and died the next year. She was buried in Munds Park and re-interred in Cottonwood in 1994.

Before I left the cemetery in Prescott that day more than a decade ago, I was standing beside a marker over three graves: "Beloved Children of Dr. & Mrs. W.E. Day," Annie, age 7; Louise, age 16; Sheldon, age 11. I figured in my head that Sheldon was born the same year that Annie died, and he died the same year as Louise.

A tall, sunburned man wearing Levis and scuffed boots who I had spoken with earlier walked behind me and paused.

"Sometimes when I'm walking through this cemetery, I say the names on the markers out loud," he said. "Then, in a way, it's as if they're still with us."

After he walked on by, I crouched in front of the three graves. "Annie Day ... Louise Day ... Sheldon Day," I whispered, hoping it was true.