Mingus renovation under budget, ahead of schedule
Contractor’s efforts saved district more than $500,000 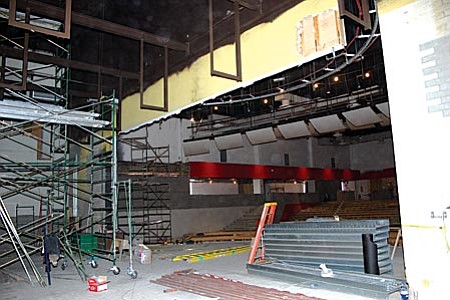 VVN/Philip Wright The backstage area of the MUHS auditorium is receiving as much remodeling as the auditorium itself. New dressing rooms and catwalks are only part of the improvements being made.

The $15 million bond-financed renovation of Mingus Union High School will be done by the time school starts next fall.

"We'll have substantial completion by July 15," said Steve Blankenship, project manager for the district. "Then we'll have punch-list items for about a month."

Blankenship said it will be a skeleton crew during that period. "And the kids will have access to everywhere on campus."

The project is now in Phase III, which includes remodeling the auditorium, band room, art room, dark room, ceramics laboratory and bathrooms in the 200 Building.

"There's a tiny bit of Phase II still going on," Blankenship said. Along with some other projects being completed, workers are putting the finishing touches on the science lab.

Other Phase II projects included the new library and media center, the principal's office and the grand entrance of the school. That phase included all of the classrooms on the west side of the 100 Building, a new welding classroom and shop, and a new automotive classroom and shop. Landscaping work was completed outside the agriculture classrooms building.

Phase I began shortly thereafter. The first major project was a new electrical service entry. That phase included the remodeling of both the large and small gymnasiums, the boys and girls locker rooms and the weight room.

Blankenship said there were some significant extras that came up that were not in the initial contract or cost estimates. Among others, those included the district having to completely redo the fire alarm systems in every building on campus. "We now have a state-of-the-art fire alarm system," he said.

"There's been a significant amount of asbestos abatement," Blankenship said. Some of it was known, and some of it was a surprise. Several other costly changes came up during construction. Those were changes, such as the compaction of the soil under the front of the building, that were expensive and had to be dealt with.

The unexpected costs did not throw the project behind schedule or over budget. The contractor Bob Booth, his superintendent Ben Van Kammen, Radoccia and Blankenship, with help from their sub-contractors and suppliers, did a lot of value engineering before the project began and throughout all three phases of the renovation.

Innovative management of hidden junction boxes inside ductwork in the main gym ceiling saved $25,000. By figuring out that the service panel at the old library could be rotated instead of relocated saved $25,000. And the value engineering before a redesign of Phase II saved $175,000.

Van Kammen said the total savings from only those five examples saved the district $512,000.

That amount has saved enough money during the project that items on a list of alternative projects are still possible.