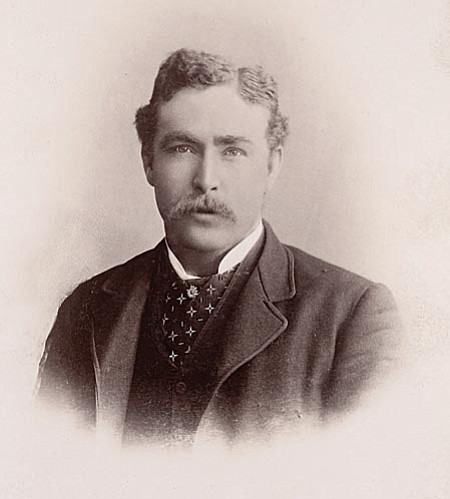 Robert Mac Rodgers came to Camp Verde from Texas. Little is known about his past while in Texas and many researchers have believed there may have been an incident there that led to his murder.

The Verde Valley's most famous murder took place almost 110 years ago, on the evening of July 2, 1899, at the former sutler's store in Camp Verde.

The brazenness of the crime and the ensuing manhunt were reported in newspapers across the country. New York Times, Boston Globe, Los Angles Times, and the Deseret News in Salt Lake City were among the papers reporting the case.

The facts of the murder varied widely, but some basic truths still stand.

Sometime between 8 and 10 p.m. a stranger strode onto the store's porch where four men -- a mail carrier whose name has been lost to history, Capt. John Boyd, a former prospector, Lew Turner, the store clerk, and Mac Rodgers, one of the store's co-owners -- were talking.

At some point, Rodgers got up and attempted to enter the store. The stranger followed him inside, shooting him in the back. The bullet exited his neck and Rodgers fell to the floor. More than one account stated that the stranger called Rodgers by name.

Rodgers' partner, Clinton Wingfield, hearing the gunshot, came out of a back room and was also shot. The bullet entered his chest and lodged in his spine, paralyzing him instantly. He died two hours later.

Boyd was shot through the leg and eventually recovered. Turner and the unnamed mail rider fled the scene unhurt.

The murderer ran about a hundred yards from the store, where he mounted an unshod horse tied to a tree near the Verde River and rode off. No money was taken.

Search for the killer

A search for the killer commenced at first light. Sheriff Munds arrived in Camp Verde about eight hours after the first group of Indian trackers, friends and family, had headed out.

By noon, Deputy Sheriff Tom Miller of Jerome and another man, "well acquainted with some desperate characters lately of Texas, who have been in the neighborhood for some time," joined them.

The killer's trail was lost by the time the first posse arrived at Mud Tanks, less than 20 miles east of town. For the next six weeks, the posse scoured the state from Globe to Flagstaff and east into New Mexico. They never found the killer.

Five people would be arrested, accused of being the killer or an accomplice. All were later released.

Contemporary newspaper accounts listed another six suspects, some of which are believed to have been aliases for the same person.

The names of Oscar Wade, John Steele, William Rose, Jim Burns, Charles Bishop, Sam Dill (aka Jack Rollins) and someone named "Sweatpad," all made headlines over the ensuing weeks.

On Aug. 16, 1899, a notorious Texas and New Mexico train robber by the name of Tom Ketchum was shot and arrested after attempting to single-handedly rob a freight train outside Folsom, N.M.

Following his arrest, a wire was sent to Arizona from a sheriff in New Mexico stating that the man arrested for the botched train robbery matched the description of the killer in Camp Verde.

Sheriff Munds and Prescott District Attorney Ling traveled to New Mexico, where they interviewed Ketchum. On their way back they showed a picture of Ketchum to Boyd who said he believed Ketchum was the murderer.

A notorious train robber, who wore the mistaken name of "Black Jack," coming to backwater Camp Verde, killing two shopkeepers and fleeing off into eternity makes for good story.

But is it true?

There have been a number of accounts written about the crime and the ensuing manhunt. Virtually every account accepts that the murderer was Tom "Black Jack" Ketchum.

However, none of the accounts refer back to the stories written by the newspaper closest to the scene of the crime, the Jerome Weekly Miner, nor do the accounts take Ketchum's movements into account or prove a motive.

Those accounts provide more questions than answers, starting with the killer's description.

On the morning following the murders, the Jerome Weekly Miner reported the arrival of Tom Hawkins, a resident of Aultman (located between Camp Verde and Jerome), with word of the murders.

Hawkins, who was not a witness, reported the killer was 5-foot-2 or 5-foot-3 tall, dark complexioned with a week's growth of "very black beard."

A week later the paper printed a description of the killer provided by Sheriff Munds, who stated he was 5-foot-10, brown hair, brown eyes and wearing a black hat.

For the record, Tom Ketchum was dark complexioned, 6-foot-2 inches tall, with black hair. A photograph of Ketchum taken in a Colorado hospital following his arrest shows him wearing a white or gray hat.

Trackers would later add that the suspect had size eight of nine boots and a size 17 collar. No record has been found of Tom Ketchum's neck and boot size or proof that anyone checked.

The description of Ketchum's "outfit," later used to "prove" he was the killer, came from Deputy Sheriff J.H. Drew, who claims to have run into the man on March 17, 1899, north of Prescott.

He describes the man, known in the area as "Bish" or "Sweatpad," who had supposedly come from Idaho the year before, as having a double cinch saddle, Winchester rifle and field glasses.

The name Bishop was used by one of the phantoms the posse had tracked along the Mogollon Rim. Charles Bishop had had been spotted in the Payson area, purchased a stock of food and plenty of ammunition.

The Los Angles Times reported on Sept. 10 that Ketchum was found with a similar outfit when he was arrested.

But could "Bish," "Bishop" or "Sweatpad," have been Ketchum?

Author Jeff Burton wrote a biography of Ketchum that in spite of its bravado name, "Dynamite and Six-Shooter," is well researched and documented from an extensive collection of original source material.

Burton places Ketchum in New Mexico in the spring of 1899 and in Roswell, N.M., as late as May 3 of that year.

There is a clearly a question of whether the man Drew ran across and Tom Ketchum were the same person.

Could Ketchum have killed Wingfield and Rodgers? Yes, he could have.

But the question that has never been answered is, why.

Why would a train robber from New Mexico and Texas, who was known to have hidden out in southeastern Arizona, come 200 to 400 miles out of his way, to backwater Camp Verde, to wait out the day behind a country store, and murder the owners without taking a cent?

Several theories have been given -- one being that Rodgers had crossed someone in Texas, perhaps Ketchum himself, and Ketchum had come seeking revenge.

Clinton Wingfield's past is well documented. Rodgers' is not as clear. However, no evidence has come forth in the ensuing 110 years that Rodgers was the type of person to become involved with Tom Ketchum or his ilk.

The other theory is that robbery was the motive, but turned to bloodshed before money changed hands. If so, once again, why Camp Verde?

Why had the killer/robber come so far, to such a remote spot, to rob from a country store? Why not one of the many other stores he had passed, in all the other backwater communities he had passed through?

In a 200-page book, Burton dedicates just three pages to the Camp Verde murders. He admits that the information implicating Ketchum lies somewhere between hearsay and evidence.

Burton holds out that if Ketchum killed Rodgers it was because the two had known each other in the past, and that the truth lies "hidden somewhere in whatever past Mac Rodgers left behind him in Texas."

If in fact the killer addressed Rodgers by name, as some accounts tell the story, then the mysterious stranger was no stranger to Rodgers.

Could it have been someone closer to home? Prior to the murders, Rodgers was involved in the prosecution of Oscar Wade, a local cowboy accused of stealing horses from the Indians. Wade was tried and released and allegedly threatened Rodgers.

Newspaper reports state that Sheriff Munds determined Wade was not the man. But, could Wade have hired Ketchum or someone else to do his dirty work, as some locals speculated?

Before he went to the gallows, Ketchum sent a letter to President McKinley seeking the release of three men serving time for a crime he and his gang had committed.

A New York Times article dated April 27, 1901, recounts the letter and Ketchum's last statements. He admitted to other robberies, the fact he was not "Black Jack" and to the knowledge of other murders. He also cursed the railroad, its employees and the people of New Mexico.

But he never admitted killing Mac Rodgers or Clint Wingfield.

Munds reported that during his interview of Ketchum, Ketchum admitted to having been in Arizona. He said he was in the Payson/Mogollon Rim area. But he said he never came to Camp Verde.

Could Ketchum have been the murderer? Certainly. Does the evidence clearly demonstrate he was? No. Under modern standards it is doubtful they would have gotten an indictment.

However, modern ballistics would have at least determined if it was his gun. And someone may actually have matched his footprints to those leaving the scene of the crime, not to mention his collar size with something other than a hanging rope.