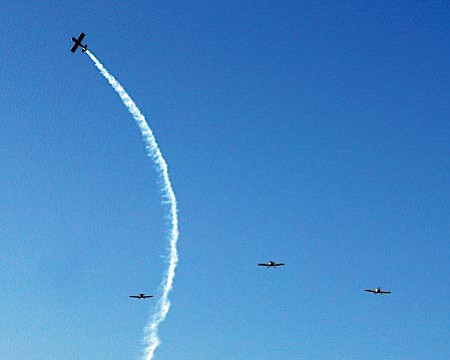 Cottonwood Airport friends and colleagues of Captain Don Thompson witnessed a traditional salute to an Aviator "Gone West" with a missing man formation flight. The expression "Gone West" was used by World War I fighter pilots who did not return from combat. The flight was to honor the passing of a life long aviator and comrade, Capt. Don Thompson. Flying the formation were local pilots Ron Burden, Jim Brock and Tom Joseph with Aleck Gradijan flying the break away missing man aircraft. The memorial service for Capt. Thompson was held at his hanger on April 4 and attended by 250 people who shall miss him. VFW Post 7400 officiated by Major Ralph Wandrey, himself a WW II fighter pilot Ace, presented a memorial flag with three gun salute for Don's service during WW II. Mayor Diane Joens posthumously awarded Capt. Thompson a plaque for service as an airport commissioner. The eulogy was given by friend and fellow aviator Aleck Gradijan. Capt. Thompson, a devoted and proud member of the Quiet Birdman, was given a memorial certificate by Neil Heindrich, the organization's Governor. Capt. Thompson flew for Western Airlines, later to become Delta Airline, for 47 years. In retirement he still enjoyed his two aircraft and was at the airport almost everyday. The pilots, from left, are Ron Burden, Aleck Gradijan, Tom Joseph and Jim Brock. All of them flew RV aircraft.