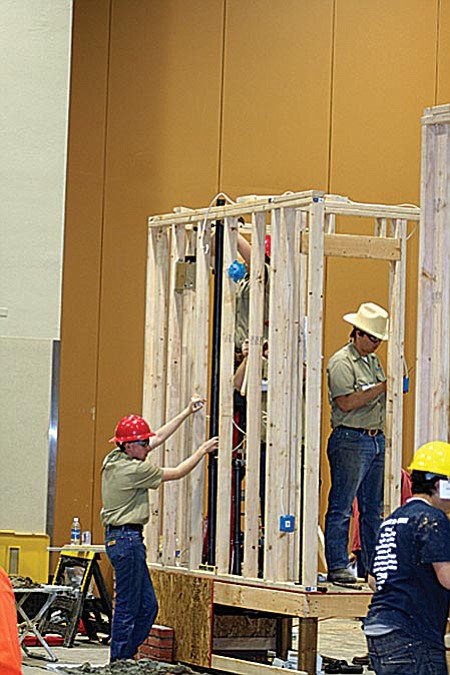 To win, the team had to build a sub-floor and frame three walls. But that was just the beginning of the project. The team members also had to complete plumbing for both freshwater and wastewater, and they had to install the electrical work and masonry. That took two full days.

Andrew Lamer, welding teacher and SkillsUSA advisor, said competing in the state competition was in addition to classroom work. "It's a place for the kids to demonstrate what they're doing," Lamer said.

"We go to a regional competition," he said. "It's kind of a qualifier for our school."

He said the building trades competition takes two days, and the team used every bit of both days to get their work done.

Building Trades teacher Duane Badger said all four members of the winning team have had three semester blocks of instruction. "I try to encourage them all to compete," he said. But this year, it was only the one team.

Badger said the team members work as a team while doing the framing work. Then each team member specializes in the remaining work, the electrical, the freshwater plumbing, the wastewater plumbing and the mason work.

Lamer said one of the main reasons this team won first place is because they work so well together as a team.

"This is the second time we've been state champions," Badger said. Mingus has taken a second place once and third place twice.

Although the construction industry is in a slump nationwide, the competition can lead to a good career start for the competing kids.

"Every time we take kids down there," Badger said, "kids have been offered jobs on the spot."

Before going to the national competition in Kansas City, each of the four team members must be OSHA certified. To accomplish that, the team recently took a 10-hour class.

Lamer said the school had many other students that competed in Television Production, Radio Broadcasting, Auto Collision Repair, Photography and Welding categories. "They all worked very hard both in the competition and in the preparation for the competition.