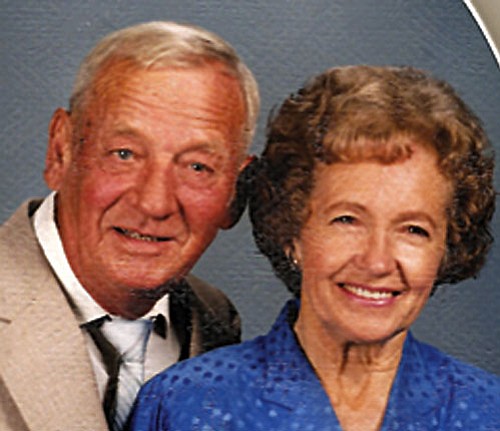 Louis Clyde Goldenstein: Born in Glenvil, Neb., where he spent his early years, his family left Nebraska and arrived in Valentine, AZ on Thanksgiving Day, 1937. They had traveled for four days with his parents Rudi and Winnie Goldenstein, his two brothers, one dog and five crates of eggs the sale of which provided their new start in Arizona.

Lou's parents ran the "station" in Congress, AZ and Valentine, AZ. "Station" in those days meant a grocery store, cabins and where the train would drop the mail- the mail station. His mother was the postmaster of Valentine (a favorite for lovers to postmark their letters) for 40 years. Later, gas pumps were added and everyone traveling on Route 66 would pass by their store. Many stayed in the cabins or picnicked on the lawn, among them were Elvis Presley, Wallace Simpson and the Duke of Windsor.

Lou attended High School in Kingman and Mesa and lived on a ranch in the Mesa farmland on what is now 8th Ave. and Country Club.

He served in active duty in the U.S. Navy during WWII on the U.S. Mainland, Hawaii and various ships including the USS Bremerton where he was the boxing champion.

He returned to Arizona and attended NAU where he met and married Daisy Womack in July 1949. They remained devoted to each other for over 59 years until her passing. Louis passed four months to the day after his beloved Daisy. Theirs is truly a love story.

He worked as a surveyor across most of Northern Arizona including Phantom Ranch, Grand Canyon, and shot the grade for what is now Laughlin, Nev.

He and Daisy owned and operated motels and gas stations along Route 66 in Peach Springs, Williams and Flagstaff. He served on the Peach Springs school board, helping to bring the first school to the Hualapai Reservation.

In 1967 they purchased the historic Adobe Ranch, south of Camp Verde, moving there in 1970. He and Daisy lived in Camp Verde 36 years.

In their honor, the NAU Horticulture Dept. is crossing the Golden Delicious and the Gravenstein apple trees to create the first ever Goldenstein Apple trees.

He was a loving person and had a limitless supply of jokes and anecdotes. He is survived by brothers Robert and John Goldenstein, children Steve and Linda Goldenstein, grandchildren Heather Vidal, Crystal, Sean and Mallory Goldenstein, Tanya Sonn and Cheston Trammel, five great-grandchildren and loving caregiver Carmen Orrellanos.

A private celebration of his life, a life well lived was held on April 25th, in the Beaver Creek wilderness. Friends and family around the country joined in a moment of prayer on that day in memory of Louis Goldenstein, a man admired and cherished for being kind, tolerant and honest. It was quoted at his service that he was one of the few people that lived one place for over 30 years and of whom one never heard a criticism.