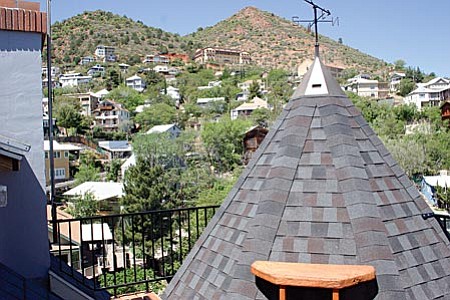 The Widow’s Walk on the top of five levels to the Robinson Victorian Home offers one of the town’s best views of other historical Jerome homes.

The 44th Annual Jerome Historic Home & Building Tour offers one of its best lineups in years with 10 stops. Included are historical and contemporary showcases of what life in Jerome was like 100 years ago, and still is today.

The Ewing House, now owned by Mary Williams, was built in 1904 by Charles Renick Ewing. He owned the Jerome Transfer Company that hauled freight, coal and lumber. Ewing moved into the home with his new bride, Pearl Boone, in 1905. The couple had a son who became an attorney and later died in a car accident in 1975.

Charles W. Ewing, a great-grandson, remembers spending cool nights on the home's sleeping porch. And in the 1950s, Ansel Adams photographed the home for Arizona Highways. Since then, the home was renovated in the 1970s by John and Iris McNerney.

The Robinson Victorian Home has been 15 years in the building, and now that it's complete, the owners, Gil and Judy, are selling and moving to Hawaii. The Robinsons were very careful to make sure the home fit in with Jerome's historical nature. One of the many delights in this home is the "Widow's Walk" on the top level offering a striking view of Jerome and many of the town's other historical homes.

Businesses once sat on the four lots purchased by the Robinson's. Those business were all torn down in the 1950s after the mine closed, and the Robinson's home displays many of the interesting artifacts found while digging the foundation for the five-story home.

The Reber House, also known as the Emma Rose, is owned by Sue Goodman. She has remodeled the home from the ground up. It was built around 1918 by Dr. Louis Reber who earned his PhD in geology from Yale University. He became the chief geologist for the United Verde Copper Company. He is known for developing aerial photography to identify ore.

Reber built the home with his wife in mind, measuring her waist-to-floor length so he could have the kitchen sink built to fit her exactly.

Goodman, whose family has owned the home for 35 years, said the residence housed a lot of miners at one point. She said some of them slept in the attic where artifacts, such as lanterns, have been found.

The Carberry House is new, and it was built according to Jerome design principles. This home is all about the views, and the main living quarters are upstairs. The builders consider Jerome an artists' colony with an unconventional lifestyle. Consequently, they created a unique blend of historical details with contemporary architecture.

The Story Teller Inn was built in 1916 by the United Verde Extension Mining Company to house company employees. It contained a coal and firewood company on its lower level. An old mineshaft is located under the cottage. John Watt bought the house in 1953 for about $2,500. This property has changed owners many times, but The Story Tell Inn has yet to operate as a bed and breakfast.

The Jerome Volunteer Fire Station was built in 1997. Volunteer fire fighting is a serious and long-standing tradition in this town that was leveled by conflagrations four times in 1899. That's when Jerome incorporated to collect taxes to provide water and firefighting equipment. Consequently, Jerome is known as the " town born from fire."

In spite of incorporation, Jerome suffered seven major fires between 1902 and 1926. The Jerome Volunteer Fire Department is more than 100 years old, and today has a fulltime fire chief, in addition to many volunteer firefighters and emergency medical technicians.

Heavenly View Bed and Breakfast was built in 1995 as a private home. This Victorian sentinel of Jerome sits on East Avenue, known locally as The Upper Hogback. The home has 3,500 square feet of interior space and 1,400 square feet of wraparound, covered verandas with terraced gardens and patios. The present owners consider this their dream home, and they have converted it into a bed and breakfast.

Western Heritage Cabinet Shop and Showroom is located inside the old Jerome High School gymnasium, built in 1930. The school closed in 1972 when its students moved to the new Mingus Union High School in Cottonwood. The current showroom for the business was originally the school's band room.

Western Heritage employs 17 people and sells it creations in 150 stores in 32 states.

The Honeymoon Cottage is the local name for the Lewis W. Douglas Home. Jimmy "Rawhide" Douglas, owner of the Little Daisy Mine, gave it to his son, Lewis, as a wedding gift in 1921. The young Douglas lived in the home with his bride, Peggy Zinzer Douglas, for only one year. She did not like life in such a rough town, and the couple moved back East and never returned to Jerome.

The home sat empty and neglected for 80 years until it was purchased in 2001 and totally restored.

Spook Hall, officially known as Lawrence Memorial Hall, is the final stop on the tour. It was originally built as a garage in 1917 before becoming one of JCPenney's largest stores. It closed in 1953. The Jerome Historical Society purchased the building, and it now serves as the unofficial community center for the Ghost Town of Jerome.

The building is used for many community functions, including the town's Christmas party and the traditional Firemen's Halloween Ball.

Free refreshments will be served to tour guests.

Tours will begin on both Saturday and Sunday at 9 a.m., and the final tour of each day will begin at 3 p.m.

Tickets are $12 for adults and $6 for children 3-12. Children aged 2 and under are free. Proceeds from the tour benefits the Jerome Chamber of Commerce.

Each tour ticket also entitles the holder to free admission to the Jerome Mine Museum.

Because of the steep hills and many steps on this tour, it is not handicapped accessible.