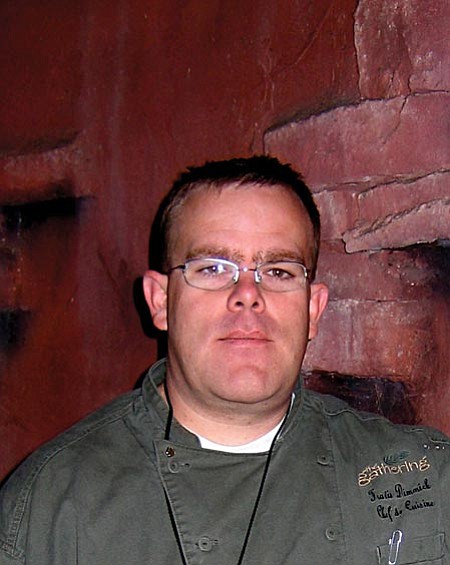 This cuisine is not only local and unique, but foods harvested from the high desert have received much recognition nationally from health advocates for helping diabetics, including Native American populations, to achieve normal weights and blood sugar levels.

It's at the cutting edge.

"High Desert Cuisine has been influenced by any and all of the peoples who came to the area - there has been a fusion of flavors and food varieties coming directly from the desert and the indigenous people who were here first, as well as newcomers to the area. It also takes its cue from the Santa Fe movement, with New Mexican and Mexican flavors figuring into the mix as well," says Chef de Cuisine Travis Dimmick of The Gathering, the restaurant at The Lodge at Cliff Castle Casino in Camp Verde, which is owned by the Yavapai-Apache Nation.

His signature dishes are those flavorful names listed above.

Dimmick is one of very few chefs in the area who specialize in this kind of cuisine. His menu also offers free-range meats from companies that do minimal processing of animals to ensure that meat has not been disturbed by the animal's adrenaline, a little known factor that has been proven to affect the taste of the meat or game.

Saguaro syrup, rare and only legally harvested by select vendors in the Tucson area from the Saguaro cacti, is used in glazes and sauces. Agave, another native plant, is used in the form of nectar and syrup for topping blue corn pancakes on Dimmick's menu.

Experimentation with hands-on ingredients and coming up with unique recipes started early for Dimmick. With two parents working throughout most of his childhood, he and his siblings took over most of the kitchen duties. His expertise with food grew over the years, and his interest in cuisine as a cultural and experiential phenomenon was enhanced by living in Vincenza, Italy, for six months while he was in the army.

"It's all about the culture - food is an event in Italy," he said. "Italians definitely value the experience along with the meal. Ingredients are sold at separate locations, and all aspects of meal preparation take more time than what Americans normally spend."

That is similar to how he approaches preparation and cooking to this day. "I enjoy every step along the way," he said, "from the identification of new, fresh ingredients, to experimenting until the flavors are just right, to the final presentation when I'm creating a new dish."

After the army, Dimmick decided to pursue a career in the culinary arts. While working as a prep cook at Milagro's in Tempe, he attended the prestigious Scottsdale Culinary Arts Institute. There, he enjoyed a creative and professional learning environment where students were encouraged to come up with their own recipes.

He served a short internship at Storytellers, also at Cliff Castle Casino, working under the highly regarded Executive Chef Nathan Schreiber. The two developed a positive working relationship, and Dimmick was hired as a line cook for the restaurant. He later went on to positions in Prescott and become the head chef at the restaurant South of the Border in Kenmare, N.D.

Eventually, though, Arizona lured him back.

He found himself missing the rugged and rolling beauty of the high desert country, and as the position of head chef de cuisine with the casino's The Gathering had opened up, he made his return.