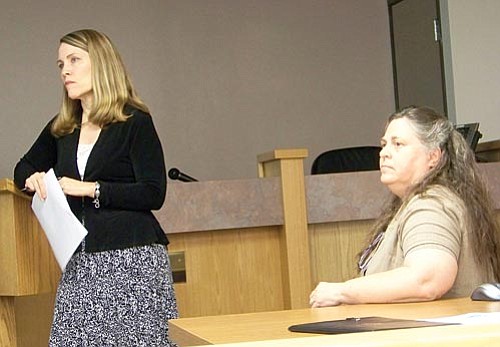 COTTONWOOD -- Three Verde Valley communities are leading the charge to make broadband Internet connection universally available and much faster for the Verde Valley. Thursday night at an intergovernmental meeting they invited all member governments to get on board a cooperative effort.

Jodie Filardo of Sedona, Sherry Bailey of Clarkdale and Casey Rooney of Clarkdale have been investigating how the Verde Valley can tap into $7.2 billion of federal stimulus funds to boost availability of high capacity, high-speed Internet access in the Verde.

High-speed broadband connectivity is seen as an economic boon for a community and, already, hundreds of communities across the United States and the world are working to provide universal access and in some cases, free access.

The Verde Valley Broadband Cooperative proposes to bring broadband service to the Verde Valley, in the same way that the Rural Electric Administration brought electricity to rural areas in the 1930s, through numerous individual cooperatives. When electricity became available to farms and rural areas, those homes purchased equipment to make use of the new power supply stimulating the local economy.

The American Recovery and Reinvestment Act of 2009 includes a provision to distribute stimulus funds to excite the growth of Internet broadband service especially in rural America. Grants with a 20 percent local match would be distributed through the Department of Commerce and Department of Agriculture's Rural Utilities Service. One of six federal public meetings on the Broadband Opportunity Initiative was held in at Northern Arizona University in mid-March.

Jodie Filardo told the meeting Thursday, "We are behind the 8-ball in rural areas compared to the 20 Mbs bandwidth available in the Phoenix area.

Rural areas do not generate the same kind of revenue as an urban area and development of broadband is not such a high priority. The Verde Valley has an estimated 60,000 people, Phoenix has 6 million.

The Verde Valley already has a number of Internet Service Providers but the bit rates they offer in the Verde is rarely as high as 3 Mbs and typically no greater than 500 kbps, if a customer has broadband services rather than dial-up.

Filardo says a tech team recently organized believes there are several broadband fiber optic "pipes" that run through the Verde Valley, but local customers may not have access to them through so-called "off-ramps."

Developed in the late "80s, those lines may cross Mingus over Cherry Road, along SR 89A, Interstate 17 and SR 260 and are owned by Qwest and AT&T. Its unclear if those lines are "lit" or "dark"

"When you ask Qwest what is available, they will tell you, "If you have a business that wants a special service, bring them to us and we will work with them." Filardo says to woo business, "We can't sell vapor!"

"We believe there is lots of "dark' fiber that passes through the Verde Valley," said Mike Golden.

Golden has become a player in the cooperative effort and is CEO of SkyPipes Wireless, based in Sedona.

"SkyPipes Wireless has a new technology they are eager to prove that would reach between 20 and 40 Mbs. "It would bring world class broadband to the Verde Valley if it works out," Filardo said. " We could control our own destiny."

Golden, with 30 years of experience and a number of patents under his belt, is working with the highly respected Arizona State University Wireless Technology Center to help test the concept. A national Science Foundation Grant is being sought for development, bringing together both public and private money.

He believes the system can work for a tenth of the installation cost of a typical system and can be scaled cost-effectively to an area as sparse as "30 homes in eight square miles."

Sherry Bailey said the use of a cooperative type organization would give the program the flexibility to expand without limiting the service, and profits would be shared with the stakeholders through lower costs. Built on the Rural Electric Cooperative Model, the Internet Coop would attract private organizations and business, non-profits, public organizations and schools, state, county and town governments as well as residents.

"The cooperative organization puts us miles ahead of competitors," Bailey said.

Cooperatives for Internet is new ground for Arizona utility law. A Clarkdale attorney has offered to help investigate the potential.

But expect to see plenty of competition for the stimulus funds in Arizona and elsewhere in the United States. Similar groups area already developing.