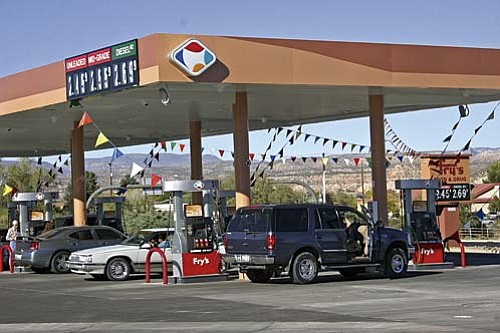 COTTONWOOD -- The ribbon cutting was scheduled for 8 a.m. this morning, but Fry’s newest fuel center has been open since Oct. 21. It is No. 33 for the company in Arizona.

Business is good. Store manager Mike Lamb said the Cottonwood fuel center has created about 10 jobs. He said the company hired five people to work at the fuel center. Four of those came from inside the store and one came from outside. “Then we backfilled the jobs inside,” Lamb said.

Construction on the new station went well. Better than expected, actually. “It was an eight week project that they got done in seven,” Lamb said.

“It’s all automated,” Lamb said. The company installed a fuel-management system called Veeder-Root. That means attendants no longer have to put a long stick into the gas tanks to measure the fuel. The system automatically measures the tank capacity, its remaining fuel and even senses if water gets into the tank. And if that isn’t enough, the automated system orders gas when needed. “There’s no phone calls,” Lamb said.

Lamb points out that Fry’s Fuel Center does not charge customers to use debit or credit cards. In fact, customers may use their Fry’s cards or home phone numbers. A “Rewards” program offers customers a discount. Any customer who spends $100 in the store earns 10 cents per gallon off on gas. Refilling two prescriptions inside the store also qualifies for the discount.

Lamb has seen Fry’s fuel center business grow. “In Prescott, I opened the third fuel center that Fry’s had in 2001,” he said. “They did 10 that year.”

It has only been recently, the company started putting the centers in with established stores.

Clarkdale Classic Station: The only copper-sided Texaco station ever built
New coffee shop in Fry&#8217;s Plaza
Dabbling in jewelry with religious overtones
Dave&#8217;s Joint Custom Woodworking open in Cottonwood
At &#8216;Our Place&#8217; everything is fresh and homemade