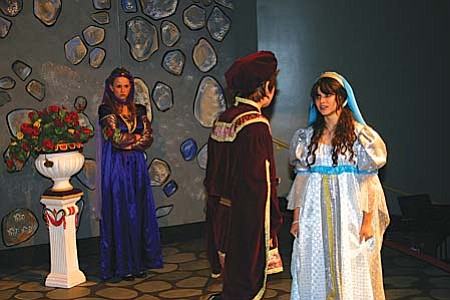 Shakespeare is tough for any actor. It can be downright intimidating for high school actors. But James Ball, MUHS theater teacher, said he is "amazed" at his students' dedication and the care they have put into "memorizing and performing the text as written."

Ball believes that Shakespeare is an "important part of the theater experience." He also likes Shakespeare plays because they have many parts for actors. "So I could get a lot of kids involved in the new theater," he said. "We have a cast of 27 and a crew of about 30."

For this production, Ball has rented professional costumes from Phoenix. "This is the most elaborate and detailed set we have ever had," he said. Even the students with acting parts in the play had to put in at least 20 hours designing and building the set.

Ball said he knew he wanted to do a Shakespeare play because his students go each year to the Shakespeare Festival in Cedar City, Utah. He said the students are always excited after the trip. "I figured I should give them an opportunity to perform what they see every year."

In his advanced theatre class, Ball had his students read A Midsummer Night's Dream aloud. Before he told them they were going to do the play, he asked them what they thought about high school students doing A Midsummer Night's Dream. His plan to get them thinking about how they would produce the play almost backfired. "A majority of them said, 'I don't think we could do this play in this high school.'"

Now the students are near opening night, and their teacher is "amazed" with their efforts and their accomplishments so far.

The kids are too.

Senior Jeremy Hutchinson is playing Bottom, the Weaver. "With Shakespeare, everything has more meaning," he said. "The jokes are more intellectual."

Jeremy admits that Shakespeare is harder than your typical romantic comedy, but he says the Bard was "a genius." He doesn't believe the lines are more difficult to learn for Shakespeare than for other plays. "Shakespeare put everything in the right place," Jeremy said.

Ball said that to accommodate the complexity of Shakespeare's work, the rehearsal period for A Midsummer Night's Dream was expanded from the typical eight weeks to 10 weeks. The first two weeks were spent simply learning the lines and figuring them out.