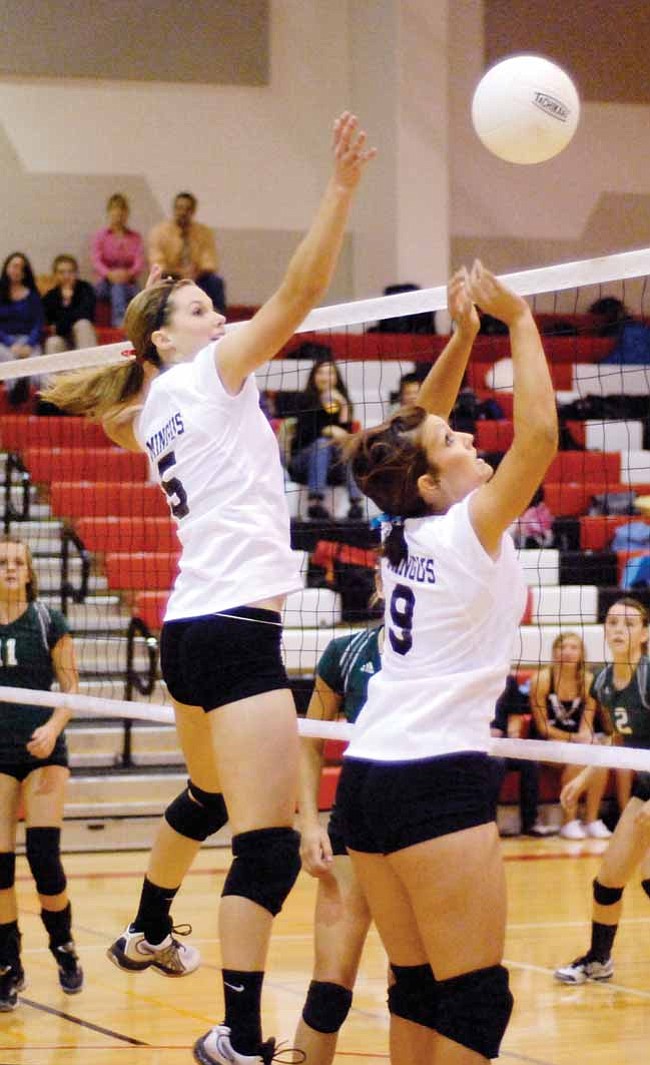 It was a victorious Halloween for the Mingus Volleyball teams on Saturday. The Freshman, JV and Varsity teams all won their double-header matches against the Page Sand Devils.

"I can't remember a season where that has happened," said coach Audrey Islas. "The hard work and practice are paying off at the end of the season when it counts. The coaches are proud."

"We had to keep hitting two or three times to get a kill. I kept telling the team to not let up and eventually they will find the floor," said coach Islas. "We did, and were able to keep their offense from being consistent."

Page has a 6-foot, 4-inch tall middle who had some middle attacks against Mingus, but it turned out to not be much of a factor overall.

"We needed this win badly, since we had fallen in the power rankings to 17," said coach Islas. "We lost a half-hearted game at Flagstaff last week and didn't play well, so we knew going into the Page game we had to pull off a win to bring our ranking up."

Mingus needed to be in the top 16 to make the state playoffs. The second match of the double-header was a little easier to win for the Marauders.

"We had taken the air out of the Sand Devils in the first match, and they couldn't get anything going offensively," said coach Islas.

"We played our best game this season. The confidence and the plays we made were exactly what we have been working on in practice," said coach Islas. "All our hitters were having success and everyone was having fun. We talked about confidence and having fun and that's exactly what they did."

After the wins, the Marauders are 10-6 overall and 7-2 in conference. Mingus went up in the power rankings to No. 11 also.

"One of our goals was to win region this season, but after losing to Flagstaff both times that wont happen, but now we are on track for the other goal of making it to the final four in the state tournament."

After ending the regular season on Tuesday, Mingus has an away game to start the state playoffs and may have to face Notre Dame or Greenway, depending on how the other teams fared on Tuesday.

Stats: Becca Shimko had 46 assists. "She did a fantastic job after coming back from a back injury," said coach Islas. "She has been a huge part of the success of the team this year."

Jill Peterson continues her consistent play while having a great blocking day. She had six blocks, 18 kills and four aces. Molly Westcott had 14 kills and remains the go-to hitter when the Marauders need to put the ball away.

Cassie Bailey had 12 kills and three blocks. Kayla Dixon is becoming an offensive threat in the middle. She is the shortest middle in the league and has become a strong contender for Mingus. She had 11 kills, four blocks and four aces. Lashea Taylor took on the role of serve specialist and did a great job. She also had four aces and was very consistent.

"We have been working on serves a lot and it paid off today," said coach Islas.

Sabrina Ortiz was again on the top of her game with 24 digs. She is a silent defender and is reading the hitters very well right now. Amanda Randolph had eight kills and two blocks. Jessie Zaske had four kills in only one game and Lesli Kinkade had one kill out of two attempts. Jordan Grau served well with one ace and no service errors.

"The whole team came together on Saturday and it was tons of fun. Way to go Marauders," said coach Islas.

Mingus finished their regular season matches on Tuesday at Coconino. The first round of the State Playoffs will begin