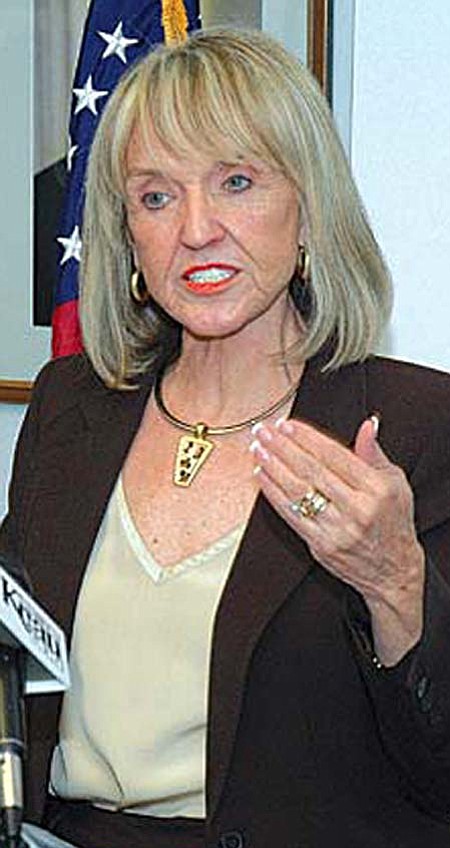 PHOENIX -- Gov. Jan Brewer has made it official today that she wants a full term of her own as the state's chief executive.

Brewer filed the legal papers this morning necessary to start collecting both donations and signatures for the 2010 campaign. A formal pronouncement is tentatively set for this evening.

Brewer, who inherited the job in January after Janet Napolitano quit to take a job in the Obama administration, already faces a primary against two fairly well-known Republicans: former state party Chairman John Munger and Paradise Valley Mayor Vernon Parker. And state Treasurer Dean Martin said he, too, is weighing a gubernatorial bid.

Pollster Earl de Berge said that Brewer's popularity has taken a hit because of the state budget crisis. A September survey done by his Behavior Research Center showed that only 24 percent of registered voters rated her performance so far as excellent or good.

But he said Brewer should not be seen as an underdog.

In fact, de Berge said he believes Brewer will get a lot of credit for her high-profile push to solve the $2 billion deficit not just by cutting spending but also by temporarily raising revenues through a sales tax hike. By contrast, Munger, Parker and Martin all oppose even giving voters the option of higher taxes.

He said voters have repeatedly shown they're willing to tax themselves to preserve education and certain important services. That was borne out, de Berge said, when Maricopa County voters approved 17 of 21 ballot measures on Tuesday for school budget overrides to preserve classroom spending.

The political problem for Brewer, de Berge said, could be the damage done to her if the Republican primary turns out to be very contentious. He said that could sufficiently weaken her, to the benefit of Attorney General Terry Goddard who is at this point the presumed Democratic contender.

Sources said Brewer is likely to campaign with public funds, just as she did when she ran, twice, for secretary of state. Part of that is that she is not a big fan of soliciting big-dollar donations; part of that is that, having waited until now to make a decision, her time to raise money is limited.

But there's another factor at work: The system, at least for the time being, provides a dollar-for-dollar match to publicly financed candidates every time one using private dollars spends more than they are allocated. Munger is running with private dollars; Martin said he is leaning in that direction.

That means more money for Brewer -- and Parker who also is going to use public funds -- if Munger or Martin pour a lot of cash into the campaign.

One thing that could foul that up, though: U.S. District Court Judge Roslyn Silver is expected to rule by early next year on a lawsuit challenging that dollar-for-dollar match. If Silver finds the system unconstitutional -- as she already concluded in a preliminary finding -- candidates who chose public financing could find their campaigns overwhelmed by better-funded privately financed foes.

Martin is not convinced that Brewer's call to let voters decide on higher taxes will play to her advantage.

"You're talking about a Republican primary,' he said, where those who turn out tend to be more conservative. And Martin, who has been elected to statewide office and has relatively high name identification, said he believes any anti-Brewer vote will not be diluted by Munger or Parker.

Parker campaign publicist Jason Rose acknowledged his client lacks that same name ID, at least for the present. But he said Parker is remedying that with his travels around the state.

Munger had some name ID when he was a member of the state Board of Regents. But the Tucson resident got a publicity bump of sorts when he was endorsed by former Gov. Fife Symington.

An Arizona resident since 1970, Brewer was a state legislator for 14 years before being elected to the Maricopa County Board of Supervisors and, in 2002, waging a successful campaign for secretary of state. She is 65.