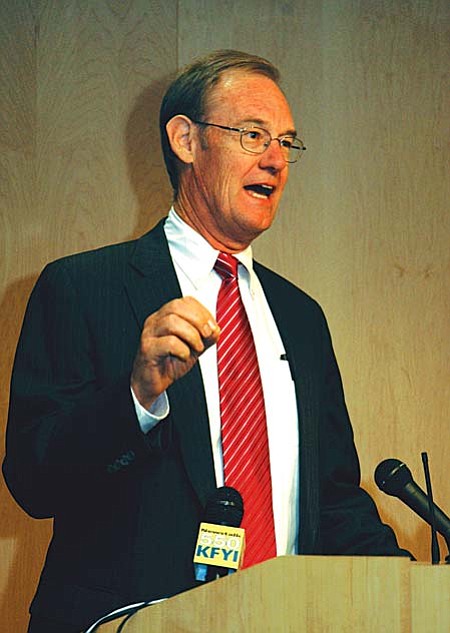 Goddard filed the paperwork to form an "exploratory' committee. That allows him to raise more than $51,000 before deciding if he really is in the race. It also allows Goddard, so far the only Democrat with any name ID seeking the office, to start raising money now without running afoul of a constitutional provision which forbids a current office holder from seeking a different post before the last year of his or her term.

But Goddard already has said publicly "I intend to run,' though he insisted that was not a formal declaration that would force him to resign his current post.

In an interview with Capitol Media Services, Goddard said he can provide better leadership than incumbent Republican Jan Brewer in resolving the state's financial hardship and the current $2 billion deficit. But he repeatedly sidestepped questions seeking details.

"Specific proposals are going to have to wait until I become a candidate, if I make that decision,' he said.

He acknowledged the state faces a "serious challenge' in balancing its budget, what with state revenues plummeting because of the economy.

"But in meeting that challenge, it seems to me that it's critical that you not destroy the institutions and the building blocks for quality recovery,' Goddard said.

"We need new jobs, and we need new kinds of jobs for Arizona,' he continued. "You can't just stagger along with the same boom-and-bust real estate-based program indefinitely.'

And Goddard would not say whether he supports Brewer's call to ask voters to approve a temporary one-cent hike in the state sales tax, a move she said is necessary while the state and national economy recovers.

"I want to look at the whole picture,' he said.

"I think we are in an emergency and we're going to have to find some emergency measures to deal with it,' Goddard said, saying he might end up backing the plan. "But I'm not going to commit on it.'

Goddard promised to come up with what he said will be an integrated plan to deal with both short-term and long-term financial problems. He said that makes more sense than what has occurred so far, with lawmakers approving -- and Brewer signing -- stop-gap measures to deal with the current deficit that might make the problem worse.

"That's why I'm very questioning about this whole business about state property,' he said. That essentially is a borrowing scheme, with the state "selling' $735 million worth buildings to investors and then leasing them back for 20 years, at which time the state will again own them free and clear.

Goddard said that financial maneuver can only be used once in 20 years. "And then what are you going to do?'

He charged that Brewer doesn't have a "master plan' to deal with the entire problem.

The governor, however, did unveil a package in March to deal with the short-term deficit with spending cuts, federal stimulus dollars and that temporary sales tax hike. But that plan also included future targeted tax cuts designed to attract companies with high-paying jobs to Arizona.

Goddard said, though, none of that longer-term plan has translated to action legislation, blaming Brewer for a "failure of leadership.'

Goddard has run for governor twice before. He lost a tight race in 1991 to Fife Symington. In 1994 his own party rejected him, preferring to put up Eddie Basha against Symington, a race that Basha lost.

Goddard said that 1991 was loss was because voters "got sold a bill of goods' by Symington. Goddard had tried, unsuccessfully, to question Symington's claims of being a successful developer.

It was only years later that he ended up being sued over his debts, creditors, filed for bankruptcy and was convicted in federal court of lying to creditors. That conviction was overturned on appeal but Symington was spared a new trial after being pardoned by outgoing President Bill Clinton.

Anyway, Goddard said he has "learned a lot' in the interim and picked up "leadership skills.'

Jim Haynes, president of the Behavior Research Center polling firm, agreed that what happened in the 1990s may be politically irrelevant.

"I wouldn't be surprised if he wasn't a pretty formidable candidate this time,' Haynes said. But the real factor, he said, is who the Republicans nominate and, more important, how divisive is the GOP primary.

"If it ends up being as bloody as a lot of people think it's going to be, I think all bets are off in terms of what kind of support the survivor ends up taking into the general (election),' he said.

Aside from Brewer, Tucsonan John Munger also is in the race, with Paradise Valley Mayor Vernon Parker having an exploratory committee. State Treasurer Dean Martin also has indicated some interest in the office.

Saying state is in 'horrible condition,' Symington considers return to politics
Goddard says Arizona needs to look at niche taxes
Brewer takes off gloves in addressing Goddard's run for governor's chair
Symington bows out of governor's race, lends support to John Munger
Goddard will not step down as AG even though he 'intends' to run for governor