The Verde Formation: A story that holds water 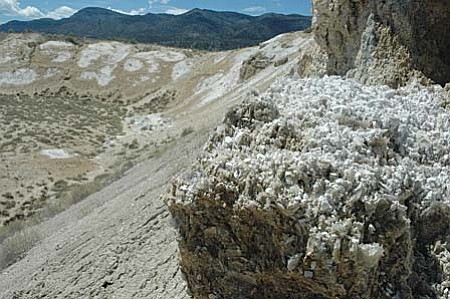 A salt mine and gypsum mine in the Camp Verde indicate the last vestiges of the lake were in that area. As the lake shrank, the minerals concentrated in the last fluids, eventually dropping out of solution and forming the evaporite deposits. Steve Ayers/VVN

When we look out across the landscape, we see not only rocks and rivers, hills and valleys, cliffs and canyons but also a record of the past.

We see a story written on pages of stone.

The challenge, for those who wish to read the story, is translating the ancient language in which it is written. It is a language that is millions, and in some instances billions, of years old.

Looking out across the Verde Valley's stark landscape you cannot help but wonder what its story may be. In particular the story behind the vast sea of white rock spread across the valley floor.

Olaf Pitt Jenkins, a geologist who was mapping Arizona for the State Bureau of Mines, was the first one to come here and study it -- the first to try and translate its archaic language. He named the sea of white rock the Verde Formation, following his visits here in 1919 and 1920.

How wide, how long, how deep?

Given the tools of his trade at the time, Jenkins did an admirable job. He recognized it for what it was, the sediments of an ancient freshwater lake.

Geologists studying the formation in the years since Jenkins first wrote of it have also done an admirable job.

They have delineated the fullest extent of the formation, encompassing more than 300 square miles and stretching in length from about 10 miles northwest of present day Clarkdale to about 10 miles southeast of Camp Verde, and in width from just below Jerome to near Sedona.

They have also located some of the lake's youngest deposits atop House Mountain, an ancient volcano located just east of Page Springs, at an altitude of 4,660 feet, and some of the oldest at the bottom of an oil well, drilled south of Camp Verde, at 1,525 feet elevation.

Their work would indicate the Verde Formation was at some point at least 3,125 feet thick.

Flagstaff geologist Wayne Ranney is among the most recent geologists to take a crack at its code.

He came to write a master's thesis as a student at Northern Arizona University and over the years has continued to work on solving the puzzle. To him the story of the Verde Formation is remarkable in many ways, not the least of which is the depth of its deposits.

Equally incredible to its depth and breadth is the length of time in which the lake was continuously laying down it deposits.

Ranney notes that the lake began forming somewhere between nine and 10 million years ago. His estimate is based on volcanic deposits on which the lake's oldest sediments rest.

Earlier geologists estimated the lake was about 6 million years old. But, as Ranney states, the tools geologists now have at their disposal allow for a more accurate estimate.

The footprints of saber-toothed tiger, mastodon and camel have been found in its upper layers, as have the bones and teeth of other vertebrates, large and small, and the remains of freshwater plants and animals. But, all in all, the fossil record is fairly thin.

What is it made of?

The Verde Formation is a composed of layer upon layer of impure limestone and mudstone, along with some conglomerates, sandstones, evaporites and interbedded layers of volcanics.

They truly read like the pages of a book.

"One of the interesting things about the Verde Formation is that you see interbedded white limestone and red mudstone one on top of the other. What those alternating beds represent is the fluctuation of the lake level as the climate changed.

"When the lake was expansive, white limestone would be deposited. Then a climate change would shrink the lake and leave red mudstone, which washed down from the red rocks of Sedona," Ranney says.

Lake Verde, as the ancient inland sea has been dubbed, was a shallow lake throughout the 7 million years it was contained within the basin.

It was fed by the same drainage that would one day became the Verde River, along with several travertine springs, one of which is believed to have formed Montezuma Well.

It was in a near constant (at least in the span of geologic time) state of flux, expanding and shrinking.

When the lake finally dried up some 2.5 million years ago, its last vestiges retreated to the lower end near Camp Verde. That fact is evidenced by the deposits of gypsum and salt the lake left behind.

"You can evaporate water but you can't evaporate mineral," Ranney says. "So all the minerals that were in the huge lake concentrated in the last fluids at the south end of the basin. And you can only hold them in suspension just so long.

'That is why you have a salt mine and a gypsum mine located in the vicinity of Camp Verde. The presence of those minerals also explains why the groundwater is so bad there."

What made it a lake?

When Olaf Jenkins first studied the Verde Formation, he postulated that the lake had formed behind a volcanic dam. Later geologists building off his hypothesis believed the dam's source was the Hackberry Mountain Volcano.

"The lava dam story was so compelling when it was first introduced that it took on a life of its own. What happens a lot of times is that when geologists discover these stories, they catch on with the public and they are repeated, even if the interpretation later changes.

"I'm not saying the lava dam story is wrong, it's just that newer thinking by geologists tends to not be incorporated in the old stories," Ranney says.

Ranney's belief is that the lake was caused by the slow subsidence of the Verde Basin, as the Black Hills rose and the basin dropped along the Verde fault. It is what geologists call a tectonic basin.

His conclusion is based on observations made in the Grand Canyon.

"I came to believe that maybe the lava dam story might not be right. As I started to ponder it a bit more I made a connection to the fact we have great lava dam lessons from the Grand Canyon.

"Those studies have shown that lava dams can be significant obstructions on rivers, but they can be removed relatively quickly," Ranney says. "They tend to be destroyed very easily by flowing water.

"When you consider that 13 different lava dams were destroyed in the Grand Canyon over just the last 700,000 years, then the idea that a lava dam could have caused a lake to exist in the Verde Valley for over 6 million years -- well it just doesn't hold water."

Wayne Ranney is the author of several books on the geology of Northern Arizona, including "The Verde Valley: A Geological History," "Ancient Landscapes of the Colorado Plateau," and "Carving Grand Canyon." A new edition of his popular book "Sedona Through Time" is due out in January.

Committed to educating the public on the geologic wonders of Arizona, Ranney also conducts numerous tours and lectures. For more information visit his Website, www.wayneranney.com.

A Violent Past
Letter: A little bit of reading will take you a long way; you learn more listening than talking
Pliocene Verde Valley: A much more 'verde' place
Natural Wonder: Stoneman Lake
Back to the Old Salt Mine: Camp Verde’s Salt Mine may have been first mined 2,000 years ago