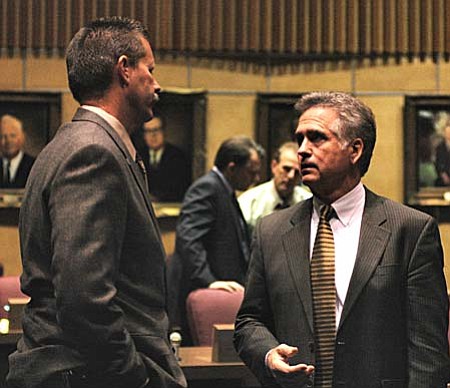 Sen. Ron Gould, left, details for Sen. John Huppenthal on Thursday why he will not support legislation to cut $300 million in state spending. (Capitol Media Services photo by Howard Fischer)

PHOENIX -- Efforts to start plugging the $2 billion hole in the state budget came to a screeching halt Thursday when two Republican lawmakers refused to support the plan.

Sen. Ron Gould, R-Lake Havasu City, said he actually supports the main piece of legislation which would trim $300 million in state spending. In fact, Gould said he wants to slash more from the budget.

But Gould and Sen. Thayer Verschoor, R-Gilbert, are opposed to another part of the package that would give agency directors the power to raise fees without getting legislative approval.

The idea behind that bill is to have those departments become more financially self sufficient. More to the point, it would reduce their need for tax dollars, freeing up that cash for other state priorities.

The pair, however, were unable to block approval of that measure when it came up for a vote, as a majority of both Republicans and Democrats support the fee hikes. So Gould then refused to vote for the separate bill with the budget cuts; Verschoor did not show up to vote at all.

That left Republicans short of the necessary 16 votes for final Senate approval, as no Democrat supports the spending cuts and one Republican, Sen. Barbara Leff of Paradise Valley, has been away all week on a cruise.

It remained unclear late Thursday whether Burns will have the necessary GOP votes next week to pass the budget without Gould or Verschoor. It will take all of those who remain of the 18-member caucus.

Gould said he believes Senate leadership will have to give in to his demands and kill the legislation with the fee-hike authorization. But Paul Senseman, press aide to Gov. Jan Brewer, said his boss does not see that as a realistic option.

"That would actually have the result of the government spending a lot more money,' he said. The savings to the general fund by letting agencies hike their fees is in the $150 million range.

"I think that would have the opposite effect of balancing the budget,' Senseman said.

The governor herself, in a prepared statement, was particularly critical of the two GOP holdouts, calling them "Republican extremists.'

And Burns, in his own statement, specifically lashed out at Verschoor, saying he "did not have the decency to show up.'

Verschoor did not return repeated phone calls. But Gould was unapologetic for bringing the process to a halt.

And Gould said he is an extremist only "in the eyes of a Republican governor that doesn't hold the party platform.' He said that also is true of the majority of his Republican colleagues.

"To me, this is just a de facto tax increase on business,' Gould said. "I think that is a bad thing to do in the midst of a recession.'

Lawmakers have been moving to have state regulation pay for itself. But Gould said it's wrong to give agency chiefs carte blanche.

"Just because they've determined that they want to have that much regulation or spend that much money on regulation doesn't make it right,' he said.

"The only way that you keep government inside of its box it to keep a cap on the purse strings,' Gould continued. "If we give them control of the purse strings, what motivation do they have to actually make their operation efficient?'

The meltdown came as Brewer was attending a meeting of the Republican Governor's Association in Austin.

But Senseman said the problems that developed were not due to her absence. And he said nothing would have been different had Brewer been at the Capitol and able to talk to lawmakers directly.

The governor returned to the Capitol Thursday, after lawmakers already went home, and began talks with GOP leaders on what to do next.

Senseman placed much of the blame on Democrats, noting not a single one voted for the spending cut plan. He said it is clear that, given the size of the deficit, the state can't keep spending at the current rate.

"But there also needs to be a two-pronged approach,' he said. "As we make those cuts, we also have to look at raising revenues.'

But the package crafted by Brewer and GOP legislative leaders dealt only with spending cuts and fee hikes. Not included was Brewer's proposal to ask voters for a temporary hike in the state sales tax.

Sen. Leah Landrum Taylor, D-Phoenix, said there are other options. She said the state is making sharp cuts in services for the needy and disabled while leaving intact exemptions from sales taxes for personal services like manicures and even "doggie day care.'

She also said it is wrong to say that the cuts simply "trim the fat' from state government, pointing to the 31 percent drop in the budget of the Department of Economic Security.

"I look at it as being a blood drain of those that are truly vulnerable,' Landrum Taylor said.

But Burns said the Democrats were mischaracterizing what is going on.

"We're not in the business of cutting,' he said.

"The cutting's already been done by the activity of the economy,' Burns explained, with a sharp decline in sales and income tax proceeds. "The cash is just not there.'

And Burns said even if there were the votes for higher taxes, they could not be implemented fast enough -- or bring in enough money -- to make a significant dent in that $2 billion deficit.