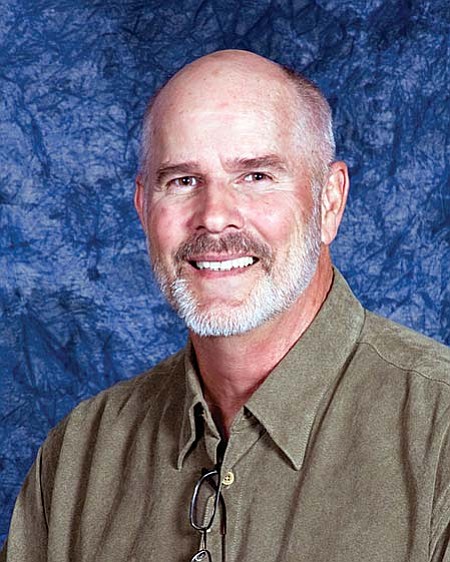 Clarkdale Mayor Doug Von Gausig made a PowerPoint presentation Thursday night to officials from communities throughout the Verde Valley. His presentation explained his vision for the Clarkdale Sustainability Park.

CLARKDALE - The town's proposed Sustainability Park is the "path to a new economy," not only for Clarkdale but also for the entire Verde Valley. That was the message from Clarkdale Mayor Doug Von Gausig.

Leaders from throughout the Verde Valley met in Clarkdale Thursday night to discuss common goals and interests. Clarkdale served as host for the meeting that drew mayors, council members and officials from Cottonwood, Jerome, Camp Verde, Sedona, Tuzigoot National Monument and the Cornville Community Association.

Von Gausig made a one-hour PowerPoint presentation on the concept of the Clarkdale Sustainability Park.

"The park will be created in the Town of Clarkdale," Von Gausig said. But he added that he could just as easily talk about it as being the Verde Valley.

The Sustainability Park is a concept that Von Gausig has advanced and is being researched and promoted by the town council and staff. The basic idea is that businesses would be located in an area around Peck's Lake. The businesses would operate in an environmentally friendly manner, and the park would produce more energy than it would consume.

Von Gausig said the impact would be the same as if every home and business in Clarkdale were on solar power. "The process is evolutionary," he said. "It will change the way communities operate."

The businesses would be sustainable, synergistic and interconnected, Von Gausig said. The park, according to Von Gausig, would produce more energy than the entire town of Clarkdale uses, and the town would become a "net exporter" of energy to the grid.

The heart of the park, as now proposed, would be a plasma converter, which would break down trash and garbage into basic elements. It is called "elemental recycling." Nitrogen gas is supercharged with electricity, which creates the plasma with heat three times the temperature on the surface of the sun.

Von Gausig said the project would require legislative support and financial backing. He said the next step is for Clarkdale to conduct a feasibility study. That study, which Von Gausig says will likely be paid for through grants, would cost about $200,000.

The benefits, however, would mean financial independence for Clarkdale, creating between $500,000 and $1 million in revenue, according to Von Gausig. It also would create considerable revenue from taxes and fees.

A representative of Tuzigoot National Monument mentioned several things that worries her agency: light pollution; disruption of archeological sites by construction; storage of large stockpiles of garbage and trash; a bank of solar panels; and increased traffic in the area and especially over the Tuzigoot Bridge, which is owned by the Park Service.

Cottonwood Mayor Diane Joens agreed. She said the park is a "wonderful concept." But she feels that "Peck's Lake should be a park and not an industrial area." She also said, "Please, no more traffic through Cottonwood."

Von Gausig said the alternative to the Sustainability Park could be a development with 900 homes.

A White Paper, Executive Summary and map of the Clarkdale Sustainability Park can be found online at www.clarkdale.az.us.