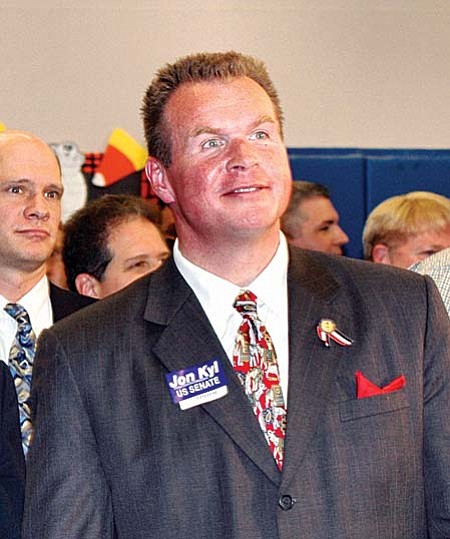 PHOENIX -- A new statewide poll suggests John McCain could get a fight in his bid for another term in the U.S. Senate.

And it would come from his own party.

A telephone survey of 570 likely Republican primary voters conducted by Rasmussen Reports found McCain the favorite of 45 percent of those questioned. But former Congressman and current radio talk show host J.D. Hayworth was backed by 43 percent, well within the 4 percentage point margin of error for the poll.

Hayworth told Capitol Media Services late Friday he has not made a decision, saying he is in the "due diligence' phase. But he said the poll results have gotten his attention.

"If the scale was down at 2 this morning before we got a certain phone call (about the survey), I would say that due diligence is now at 9.5,' Hayworth said.

He said no decision will be made before the end of the year.

One of the issues Hayworth has to consider is cash: McCain already has nearly $27.8 million in campaign cash in the bank according to the most recent finance reports. By contrast, Hayworth is still paying off legal fees in connection with a probe by the U.S. Department of Justice of his connection to lobbyist Jack Abramoff.

In fact, his political allies have scheduled a fundraiser for him next month at the home of political consultant Jason Rose to help him retire that debt.

But Hayworth said McCain's big war-chest will not be the same advantage in 2010 that it might have been at one time. He said the increasing use of the Internet, including blogs and social media, may make it easier for a candidate with limited funds to get exposure.

And he clearly already is looking for ways to make McCain's cash an issue, saying it "clearly is a large sum of money for a leading proponent of campaign finance reform.'

Hayworth served 12 years in Congress before losing a reelection bid in 2006 to Democrat Harry Mitchell. He currently hosts a talk show on KFYI, a Clear Channel station with a decidedly conservative bent: It also runs Rush Limbaugh.

McCain aide Brooke Buchanan said the senator "never takes any election for granted.' She said McCain, first elected to the Senate in 1986, "is working hard to continue to deserve the support of Arizonans as he fights to create jobs in the state and keep America safe.'

Pollster Fred Solop of the Social Research Laboratory at Northern Arizona University said Hayworth's numbers are not surprising. He said many Republicans do not like McCain.

"They clearly are looking for alternatives,' he said.

Potentially more significant, Solop said the No. 1 issue on the national agenda next year is likely to be immigration. He pointed out that President Obama promised to deal with the question next year.

That works heavily in favor of Hayworth who has become one of the leaders of the efforts to combat illegal immigration. Less than a month ago he was the emcee of a press conference featuring Sen. Russell Pearce, Maricopa County Attorney Andrew Thomas and Maricopa County Sheriff Joe Arpaio, all promising to back new state laws to catch those who entered the country illegally.

By contrast, McCain is viewed with some suspicion by some Republicans because of his decision to co-sponsor immigration reform legislation, which included a path to citizenship for those here illegally.

On the other side of the equation, the survey found that 16 percent said they didn't know enough about Hayworth to have an opinion of him.

The poll also found former Minuteman leader Chris Simcox with the backing of 4 percent of those asked. Another 2 percent preferred some other candidate, with 7 percent undecided.

Younger Republicans voters like Hayworth more than their older ones. He also had the backing of a plurality of Republicans who call themselves conservatives, while McCain had a comfortable lead among liberal and moderate Republicans.