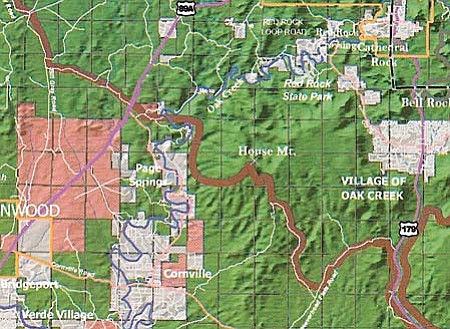 COTTONWOOD -- Little about the Forest Service administration would change if the Red Rock Ranger District were to be designated as a National Scenic Area under the current draft legislation, the District Ranger told the Cottonwood City Council Tuesday.

But, Heather Provencio said that an NSA takes the specific form of its enabling legislation and that could still change before it becomes law. Congresswoman Ann Kirkpatrick, who says she will sponsor the bill, has asked for public input into the process into her office before Dec. 1.

The NSA would make those restrictions permanent.

Provencio told the council the Forest Service must remain neutral over the proposal. Others who spoke were clearly opposed.

One was Bob Gillies, who preceeded both Provencio and Ken Anderson as Ranger when it was called the Sedona Ranger District.

He told the council that the boundary used to define the National Scenic Area was created as a planning tool by the Forest Service and "does not make a good boundary for the NSA."

Legislation, according to Gillies is a lot more difficult to change than a forest plan, which allows for future "flexibility." He told the meeting that, "I fear the things that could slip into the bill that were not intended."

Ron Volkman, who lives at the north end of Bill Gray Road, told the meeting that "there is no land exchange problem here. These are 'imaginary fears.'"

Volkman cited his own research saying, there have only been two recent exchanges within the district of Forest Land. Those exchanges provided land for the Sedona Cultural Park and Sedona Red Rock High School. All other recently exchanged lands have actually added private property to the Coconino Forest, mostly former rural ranches, said Volkman.

He cited cases in which utility projects within, or just-even near existing National Scenic Areas have been frustrated for years and eventually abandoned. "People will be surrendering authority to Congress. Local control does matter," said Volkman.

All eight of the existing national Scenic Areas total 380,000 acres, but the Sedona NSA would total 160,000 acres by itself, said the NSA opponent.

He warned that some future group will use the legislation as ammunition for litigation and that the boundary for the National Scenic Area would lie within one mile of Cottonwood, should it annex state trust land.

Mayor Diane Joens asked if Cottonwood could request that the NSA boundary be moved closer to Sedona and away from Cottonwood.

The City of Sedona is already asking that wording be included that would continue to allow municipal projects and utilities within the forest land.