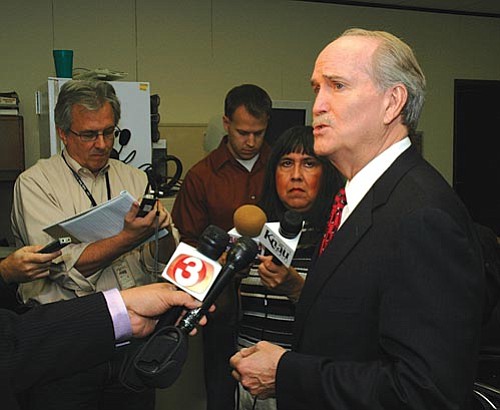 Capital Media Services<br> John Munger, former head of the Arizona Republican Party, announced his bid to be governor on Friday.

PHOENIX -- Saying he can do a better job than the incumbent, Tucson attorney and former Arizona Republican Party chief John Munger took the first steps Friday in his bid to oust Jan Brewer as governor.

Munger, 62, filed the legal papers to begin collecting signatures to become his party's nominee in next year's race. At this point, he is the only high-profile Republican in the race, though others -- including Brewer herself -- have indicated they will run or are leaning in that direction.

"Jan Brewer's done the very best she can,' he said. "I think it's now time for someone who wants to run for governor, who brings real leadership to this state.'

And Munger, a former president of the Arizona Board of Regents, said he has "a real specific plan to bring Arizona out of this recession.'

But Munger was short on specifics, saying those would come in the weeks and months ahead. He did say there are solutions to the state's current $1.5 billion deficit other than higher taxes or cutting spending.

But here, too, he was short on details.

"I will explain that on the campaign trail,' he said.

Brewer, who became governor in January after Democrat Janet Napolitano quit to take a post in the Obama administration, has come under fire from many members of her own party for how she is managing the deficit, much of which she inherited from her predecessor. Most notable has been the opposition to her plan to ask voters to hike the state's 5.6 percent sales tax by a penny for three years to generate about $1 billion a year.

That proposal remains in limbo as Brewer has been unable to line up the votes to put the issue on the ballot.

Munger added his voice to the opposition to that plan, saying he agreed with those lawmakers who don't want a public vote on the tax.

"It's the wrong answer,' he said. "You can't tax your way into prosperity.'

Munger acknowledged that he supported a permanent sales tax hike of six-tenths of a cent that was on the ballot in 2000. Those funds were specifically earmarked for education.

"The economic situation in 2000 was entirely different,' he said.

Munger did promise some major changes in education, including paying qualified teachers more than $100,000 a year. But he said that will require "fundamental reform' of the system.

"We need to quit throwing money at a bad business model,' he said.

"The one thing you're going to hear me talking about is great teachers deserve great pay,' Munger said. He said that is the best way to guarantee quality teachers.

"We're going to get them because we're going to pay for them,' he said, saying there is "bloat and waste' in the budget to finance that.

As proof, he cited the most recent study by the state Auditor General's Office which showed that only 57.3 cents of every education dollar went into the classroom. The balance went for everything from utilities, counselors, transportation costs and administration.

"Other people who are running are virtually all professional politicians,' he said. Munger, an attorney in private practice who has never held public elective office, promised to be a "citizen governor.'

But Munger does not have that claim all to himself: Already in the running for the GOP nod is Scottsdale businessman Robert Graham, president of a financial consulting and investment firm.

Munger said he will run his campaign with private finances rather than accept public funds.