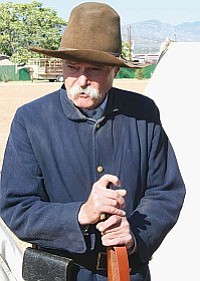 From living history (above) to modern bull riding (below), Fort Verde Days has it all.

The 53rd annual Fort Verde Days is Oct. 9-11, Friday, Saturday and Sunday, in Camp Verde. The festivities offer spectacles and fun for all.

The parade on Saturday, starting at 10 a.m., is headed by the Camp Verde Cavalry and the Colonel's Daughter. The grand marshal is Charlie German. This year's theme is "Keeping Traditions Alive."

The Bull Bash is both Friday and Saturday nights at 7 p.m., with the popular Kids' Rodeo Saturday and Sunday at 1:30 p.m.

The Kiwanis Pancake Breakfast is Saturday at the Community Center, from 7 to 9:30 a.m.

The Art Show starts right after the parade until 7 p.m. Saturday and from 10 a.m. until 4 p.m. on Sunday. Featured artist is Vada Lovato.

The Carnival will be open all Friday evening until 11, Saturday from after the parade until 11, opening 10 am Sunday.

The outdoor community dance will take place 9-11:30 p.m. on Saturday night after the Bull Bash. Live music goes on all the time.

The Arts & Crafts exhibit goes on after the parade until 5 and on Sunday, 10 a.m.-4 p.m. in the Community Center

The popular Horseshoe Tournament takes place at Boler's Bar on Main Street from noon on Sunday.

The Parade Trophy presentation will be at noon on Saturday at the Town Gazebo.

Since 1957 the parade and barbecue have attracted people from the metropolitan centers of the state to spunky little Camp Verde, which only wanted to develop and maintain its own small museum and keep its post-Civil War history alive. Back then the barbecue was free to all comers.

Always closely allied to the Town of Camp Verde, the Fort is offering (free) its own special events on Oct. 10-11:

• Cavalry and Infantry Drills on the Parade Ground at 9:30 and 10 a.m. Sunday