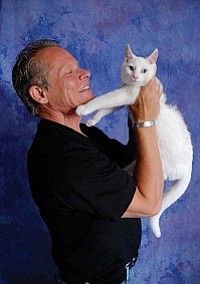 The great thing about Pet-A-Palooza is that you're not only meeting your new best friend, but you're also saving a life," said Joe Sowerby, founder of the annual animal adoption event. "Because it saves cage space, you're also saving at least one other animal from being euthanized."

Saving lives of animals, primarily cats and dogs, is what Pet-A-Palooza is all about.

It is a one-day event that brings together rescue and adoption agencies, including the Verde Valley Humane Society, the Humane Society of Sedona, Coconino Humane Society, Paw Placement of Northern Arizona, Second Chance Center, Greyhounds of Verde Valley, Tara's Babies, and - coming all the way from Utah to participate - The Best Friends Animal Sanctuary.

In six years, the most successful single day for Pet-A-Palooza sent 152 deserving animals to new homes. "The shelters tell me they do as many in one day as they normally do in a month," Sowerby said.

Pet-A-Palooza moves to the Verde Valley Fairgrounds on 12th Street in Cottonwood after being held at Sedona Red Rock High School and Mingus Union High School in recent years.

"There will be hundreds of animals to choose from," he said. "The animals will be spayed and neutered and vet checked."

Puppies, kittens, young animals and mature animals will all be available during the event.

"We really put a focus on older animals," Sowerby said. "The older animals are far more at risk in the shelter.

"These animals are stuck in these shelters in small cages," he said. "It's hard on them all. But it's especially hard on large, older dogs."

Sowerby is a dog lover as well as a cat lover. And he is passionate about saving these animals' lives.

He was drawn into saving animals' lives when he found a malnourished kitten on some rental property he owned in Detroit. Sowerby took the kitten home, named it Hayes and cared for it. "We had him for 21 ½ years," he said.

Sowerby started Pet-A-Palooza in Michigan in 2002. That event has grown to be the second largest such event in the United States. "We've sent home as many as 578 animals," he said. The event was held this year in The Palace where the Detroit Pistons play.

Sowerby urges people who adopt animals to make a lifetime commitment - the lifetime of the animal. He, and every person who works in any of the animal rescue shelters, urge people who are already pet owners to spay or neuter their animals. "There is low-cost spay and neuter service through your humane society," he said.

Each of the humane societies and rescue agencies that participate in Pet-A-Palooza will have its own application and adoption fee.

Most of all Sowerby asks people to come out and take a look at the cats and dogs that are up for adoption. There will be a perfect best friend for almost everyone.

"These animals are in jail for no crime other than being homeless," Sowerby said. "They don't have a voice. We are the only voice they have."