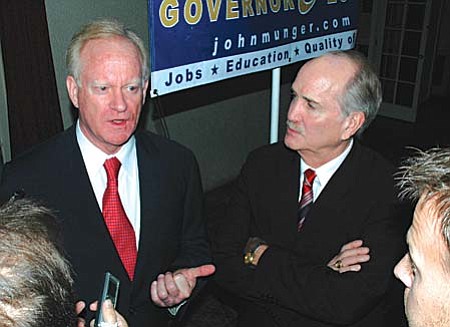 Capitol Media Services photo by Howard Fischer Former Gov. Fife Symington, left, answers questions Thursday about his decision not to seek his old job back but instead endorse Republican contender John Munger. Symington said the decision was unrelated to any fears he had that foes would make an issue of his 1997 criminal conviction on financial fraud charges, a conviction that was subsequently overturned.

PHOENIX -- Trailing badly in one recent poll, former Gov. Fife Symington on Thursday gave up on the idea of getting his old job back and threw his support behind GOP contender John Munger.

Symington said he really was considering a run, to the point of even getting a campaign finance chairman. But he said Munger, a long-time political ally, "wants it more than I do.'

Symington also said that his being forced from office in 1997 following a criminal conviction on charges of financial fraud played no role in his decision not to run but instead support Munger. He said that was old news -- and politically irrelevant.

"I'm used to that,' he said of the question.

"I learned a long time ago elections are decided about the future: where are you going to take the state, what are you going to do to right the ship,' he continued. Symington said he believed he could convince voters that he had that experience and skill.

He also dismissed questions about his electability despite a survey last month by Public Policy Polling which showed that presumed Democratic nominee Terry Goddard would defeat him in a general election by a 52-29 margin. Symington instead cited a more recent survey by Rasmussen Reports showing him just 7 points behind in such a head-to-head race.

"That's really nothing,' he said. "What it did show was that I could probably win the Republican primary.'

Symington had discussed his interest in seeking election with Capitol Media Services last month, saying much of the state's financial problems are due to "very poor decisions' by incumbent Republican Jan Brewer. He brushed aside as irrelevant Brewer's argument that she inherited the deficit in January when Democrat Janet Napolitano resigned to take a post in the Obama administration.

But Symington said Thursday he concluded that it would be wrong to run against Munger who chaired his two gubernatorial election campaigns in Pima County. And it was Symington who appointed Munger to the Arizona Board of Regents.

Symington said he does not mind standing on the sidelines while Munger gets the attention.

"It's actually fun for me because I don't have to go through the punishment he's going go through,' Symington said. "But I can be a part of the policy which I really love.'

Symington's second term came to an abrupt end in 1997 after a federal jury found that he had defrauded his creditors by lying about his financial condition.

That conviction was overturned after an appeals court concluded that a juror had been improperly dismissed. Symington was spared a new trial when President Bill Clinton, in one of his last acts in office, pardoned the former governor.

"Gov. Symington is one of the most popular Republicans in this state,' he said.

Brewer has not yet announced whether she will seek a four-year term of her own but has said she is "leaning' in that direction. Other high-profile Republicans who have formed exploratory committees or expressed interest include state Treasurer Dean Martin and Paradise Valley Mayor Vernon Parker.