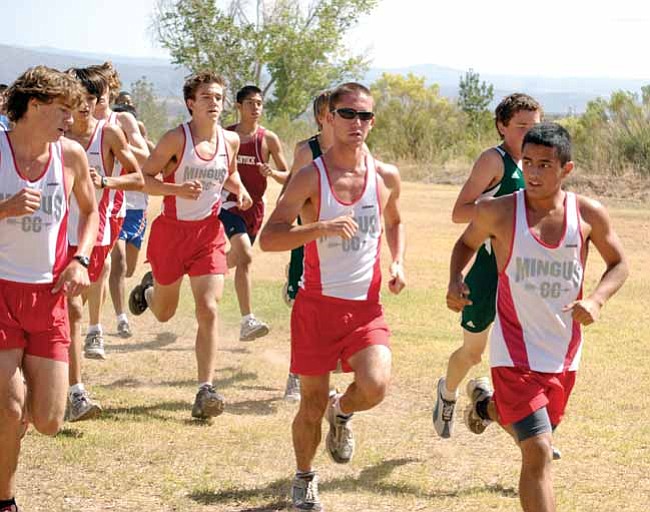 The Mingus Union Cross Country team made its annual trip to Tuba City on Friday to experience reservation cross country at its best ... ankle deep sand, steep hills, record heat and to top it off arguably the best quality of teams of any meet in the state. Just in this meet we had five state championship or runner-up teams from last year.

Mingus boys JV led off the day. Sophomore Chris Ortiz started the day off great by winning the boys race in 20:22 in the 61-runner field over 3.12 miles. Sophomore Lane Gehl was 14th, sophomore Pal Scott was 18th, junior Tanner Johnson was 31st, and freshman Trent Anderson was 53rd. This earned them a 5th place finish in 9-team field.

The girls team, by their own admission, had their worst performance of the year.

Be it fall break or sickness going around or vacations on fall break; Regardless the girls are looking forward to ending the season over next two weeks on a much better note than on Friday.

The team finished 4th out of nine complete teams (15 teams on the line, some smaller schools just didn't field a full team for team of five to be eligible for team scoring).

The Mingus girls were led by sophomore Emma Schraner, who finished in 13th place in the 78-runner field. She finished in 24:16. Senior Staci Hewitson finished in 22nd place in 26:09, 29th place was junior Erin Freriks in 27:35, right ahead of freshman Skyler Storie in 30th place in 27:37. Senior Chelsea Ishimoto rounded out the scoring in 37th place in 28:45. The race was won by No. 1 ranked 4A team in the state, Page.

The boys' three-year reign as champions came to end to the Host Tuba City warriors (defending 3A state champs) who had 47 points. In second place was Many Farms (runner-up in 2A last year) with 68. Mingus came in 3rd with 82 points in the 13-team field.

As with girls, the boys ran with a smaller squad on Friday with only five and had to be perfect against such quality teams to win. Mingus wasn't but the boys are looking forward to the final few weeks.

Senior Wilson Cutbirth lead the Marauders in 3rd place in the 90-runner field with a time of 18:35, behind the amazing Tuba city duo of Billy Orman and Ryan Yazzie (who also went 1-2 at the state meet last year). Sophomore Juan Wells improved his time from last year the most of any of the Marauder athletes and finished 6th in 18:58. Junior Hunter Rauch was 9th in 19:11, Junior Austin Covey was 22nd in 20:05 and sophomore Colin Garttmeier was 42nd in 21:15.

Next up for Mingus is the Yavapai County Championships on Thursday at the Yavapai Hills Golf Course. Racing begins at 3 p.m.