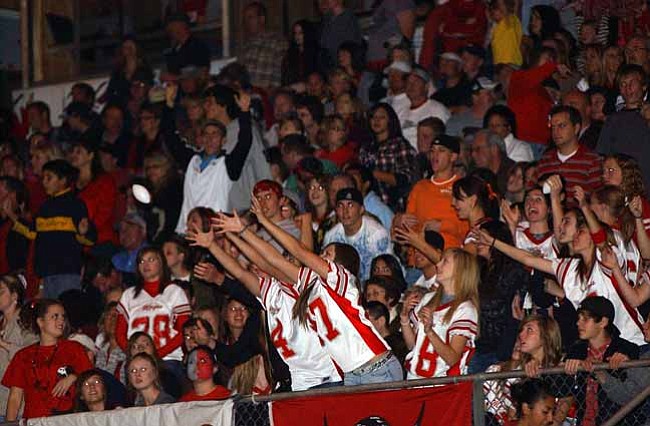 COTTONWOOD -- The Mingus Union High School football team took charge from the start against visiting Sinagua on Friday night with a 65-2 Homecoming win at the Cave.

In front of a packed house, the Marauders proved why they are ranked No. 1 in the 4A II Conference Power Points. The defense was unrelenting while the offense pulled off big plays to make the fans erupt with cheers and applause.

Sinagua got the ball first, but was stopped with a 3-and-out. This was the scene for the Mustangs' offense for most of the night. Then the Marauders scored their first touchdown of the game without having one offensive player out of the field. Carson Sandoval fielded the punt and ran it back 56-yards for six points. Des Braly split the uprights and made it a 7-0 game.

The Marauder defense didn't give an inch. Instead the Mustangs were frustrated with every possession in the first quarter on 3-and-outs. The next time the Mustangs punted, Sandoval took the punt and began to run it down the sidelines. A desperate Sinagua player horse-collared Sandoval to take him down. The penalty was 15-yards for Sinagua, but it may have saved the touchdown.

The effort was futile. On 1st and 10 from the Mustang 28-yard line, quarterback Nick Alred completed a pass to Mike Majors, who ran it into the end zone for a quick six points. The offense went for the 2-point conversion but came up short. In just one offensive play for the Marauders, they led, 13-0.

Sinagua only had three chances to get things going on their next drive, when on 3rd and eight, a pass ended up in Cruz Chavez' bread basket. Mingus' offense took over on Sinagua's 30-yard line. On 1st down, Alred handed the ball off to Juan Gonzalez up the middle. Gonzalez cut to the outside and was gone ... 30-yards to the end zone. Des Braly kicked the PAT and Mingus led, 20-0.

After the Marauder defense held Sinagua to another 3-and-out, the offense took over. Alred gained 20 yards on the first down. Then at the Sinagua 35, Alred was sacked twice to set up a 3rd and 20. Alred pitched the ball to Majors who took off running down the sideline. Once past defenders, he was a blur and scored six points. The PAT was no good and Mingus led, 26-0 with 2:15 left in the first quarter.

The next Sinagua drive was crushed when Cruz Chavez sacked the quarterback on 3rd and nine, forcing yet another punt. On 1st and 10 on Sinagua's 45-yard line, Alred threw a perfect pass to Majors up the middle. Majors turned up field and scored another touchdown for Mingus. Braly kicked the PAT and made the score, 33-0 as time expired in the first quarter.

Sinagua got the ball to start the second quarter, but the new quarter didn't bring them any new opportunities. Instead, the offense was forced to go 3-and-out with big tackles and pressure from Davila and Gonzalez.

The Marauders got the ball after the punt on the Mustang 27. Alred handed the ball off to Jesse Timm for nine yards. Then Alred found Timm in the air for an 18-yard touchdown. The PAT attempt was blocked and the score was 39-0.

For the first time in the game, the Sinagua Mustangs were able to have more than three downs on offense. After being stuffed on the first two plays, the Mustangs gained a first down. They gained 20-total yards on the drive but was stopped after six tries.

Sandoval took the punt and again blew threw the Mustang special teams for a 70-yard punt return for a touchdown. The PAT was no good and the Marauders led 45-0 with 5:25 left in the second quarter. The touchdown also started the continuous clock. It had been the third time in three games that the Marauders forced the continuous clock against their Grand Canyon Region rivals.

After stopping Sinagua again, the Marauders scored another touchdown in the first half when Alred pitched the ball to Majors for a 10-yard touchdown. Braly kicked the PAT and the score was 52-0 at halftime.

During the halftime festivities, the Homecoming King and Queen were crowned. This year's picks were Jill Peterson and Taylor Mickel. Halftime entertainment was also provided by the Mingus Marching Band and a routine by the Cheer Squad along with the Mingus Volleyball team.

Sinagua kicked the ball off to Mingus to start the second half. They attempted an inside kick, but the ball was recovered by Mingus at Sinagua's 48-yard line. In at quarterback was Ronald Morones. Kevin Webb was his go-to guy on 2nd down that netted 17 yards. Then Morones handed the ball off to Cruz Chavez who took off running to the outside. Chavez found the endzone on that play from 29-yards out. The PAT was no good and the Marauders led, 58-0.

The Marauders that took the field, consisted of players from the JV squad that went undefeated this season. Andrew Hickey kicked the ball off to Sinagua. For only the second time of the game, the Mustangs were able to get a first down during the drive, but like before - they were stopped when Eric Quesada tipped away a pass and the D-line stopped any gain on 4th and five.

Sinagua turned the ball over on downs and Mingus began another drive on Sinagua's 37-yard line. Morones and Paul Bissen combined for nine yards. Then on 4th and inches at the Mustang 27-yard line, Morones kept the ball, sprinted and dove to get the ball down to the 1-yard line and a fresh set of downs. Morones got the reward, with a 1-yard touchdown run on the next play. Braly's PAT kick was good and Mingus led 65-0 with 3:01 left in the 3rd quarter.

Sinagua was stopped. The only points the Mustangs put on the board was when their defense tackled sophomore quarterback Troy Majors in the end zone.

It was a blowout for Mingus' 2009 Homecoming and the third straight blowout for the Marauders in their Grand Canyon Region Schedule. Next up for Mingus is Coconino on the road next Friday. Then they return home on Nov. 6 to take on Region newcomer, Mohave in the last region game.