Smoke Gets In Your Eyes: When smelter smoke reigned 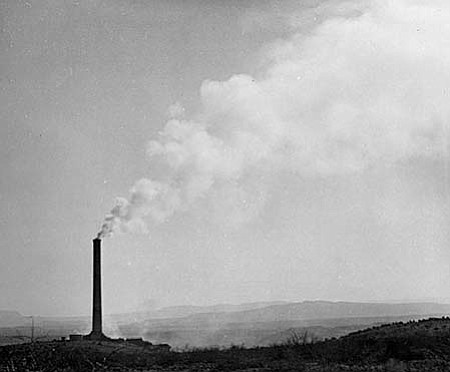 JEROME - The mineral wealth beneath Jerome is contained within a rare ore deposit known to geologists as a volcanogenic massive sulfide.

A billion years ago, give or take few hundred thousand, the rock beneath Jerome was on an ocean floor.

Along that ancient ocean floor, as is the case today along deep ocean volcanic rifts, were hydrothermalvents known as "black smokers."

As the sulfides are expelled, they are cooled rapidly by the surrounding seawater and deposited on the ocean floor. There, the highly concentrated minerals form mounds or fill depressions, which eventually become part of a continent.

They also make the discoverer very rich. Virtually all of the world's valuable deposits of copper, zinc and lead exist as volcanogenic massive sulfides. To add to their value, gold and silver are also found within those ores.

However, what nature has brought together man must separate if the metal contained in the sulfide ores is to be made usable.

In the case of the Jerome mines, the process of separating the copper and other metals from the sulfur caused another separation along the Verde -- a rift between the mines and the local farmers and ranchers that would fester for almost 20 years.

To separate copper from sulfur the rock is heated in a smelter. The metals eventually become metals, and the sulfur goes up the smokestack as sulfur dioxide, along with other trace toxins such as lead and arsenic.

Although sulfur dioxide is a necessary compound for most plants, in excess it is a poison.

Change in the wind

Up until 1913, the smelting operations in Jerome posed no serious problems for the ranchers and farmers in the Verde Valley. With the plant located 2,000 feet above the valley floor, prevailing winds carried the smelter smoke away from the local farms.

However, a fire, which began in 1894, eventually forced the United Verde mine to resort to open-pit mining. As it turned out, the richest ore was located beneath the Jerome smelter.

After almost 20 years spent making the transition from underground mining to open pit, United Verde mine owner William Clark fired up his new Clarkdale smelter in 1913.

By 1917, as additional furnaces were fired up to meet increased demand due to World War I, complaints started coming in from local farmers, stating the smoke, now being produced on the valley floor, was destroying their crops.

To add to the poisonous cloud hanging over the valley, rival mine owner James Douglas of the United Verde Extension fired up a second smelter in 1918, farther down river in a little place called Verde.

Newspapers were soon reporting damage to a wide swath of rangeland and farm fields, along with the presence of "a greasy slimy substance...doubtless due to some chemical reaction of the smoke and dews."

An acrid smoke filled the valley, day and night. Mixed with water, the sulfur smoke turned to sulfuric acid, which spread death to the surrounding hills.

One resident reported the sulfur smoke burned "everything, including our lungs and the paint on our houses."

Before Douglas could rename his new smelter community Clemenceau, in July 1920, subpoenas had been served. What would become a 20-year court battle between the mines and their food suppliers was under way.

The notion that smelter smoke caused crop damage was nothing new.

Similar battles between farmers, ranchers and miners had gone on for years in the mining regions of Butte, Mont., Salt Lake City, Utah, and Northport, Wash.

Those court cases had determined that sulfur dioxide was damaging to plants. However, because so many other factors were involved, collecting on those damages had proven difficult.

One group of farmers in Montana had spent $40,000 on legal fess to win a case in which they were awarded just $350.

In 1916, more than 100 farmers and ranchers organized as the Verde Valley Protective Association, to fight the United Verde and United Verde Extension mines.

In response, the mining companies began buying up farms and ranches, then renting or selling them back to the original owners, along with a "smoke easement."

The easement prevented the farmer or rancher from suing for damages, effectively allowed the mining companies to pollute the land at will.

By standards of the day, the two smelters built along the Verde were efficient. That, however, did not preclude them from emitting enormous amounts of sulfur dioxide.

During the heyday of the mines in the mid to late 1920s, the Clarkdale smelter alone released almost 1,000 tons (2 million pounds) of sulfur into the air, every day.

It wasn't long before much of the valley became a wasteland, littered with dead trees, denuded bushes and wilted crops.

Justice, or just us?

By 1919, the mines had purchased enough smoke easements that the Verde Valley Protective Association was effectively neutered. Just 13 farmers were left to carry the fight to the courts.

In 1921 the first case went to court. The plaintiffs prevailed and were awarded $1. The United Verde Extension paid the court costs.

In 1925, W.A. Jordan, one of the original organizers of the Verde Valley Protective Association, along with his brother and sons, sued both mines for a total of $62,000 in damages. On Sept 19, a jury awarded them $9,995.10. It was one of the few substantive victories for the farmers.

Over the next 15 years additional lawsuits were filed. But the fight was not contained to the courtroom.

The farmers began accusing the mines of sewing their fields with insects in an effort to blame the crop damage on bugs.

The mines retorted that the farmers and ranchers didn't know their business, claiming the damage was due to overgrazing, depleted soil and bad irrigation practices.

To prove it, the United Verde Extension grew its own gardens next to the smelters. In 1926 one of those gardens produced a corn crop that took second place at the Arizona State Fair.

The mines also pitted farmer against farmer by soliciting the help of farmers who were either unaffected by the smelter smoke or unopposed, to act as their witnesses in court.

They even assaulted the farmers' character, accusing one of stealing corn from a company farm and another, Nick Kovacovich, of being in the country illegally and failing to pay his taxes. Nothing came of any of the accusations.

The last major victory for the farmers and ranchers came in 1930 when the Perkins Cattle Company sued for damage to their federal grazing allotment land, four to seven miles from the smelters.

The Perkins family sued for $50,000. The mines offered $7,500. They both settled on $17,000, but only after the Perkins family agreed to a smoke easement across their entire ranch and grazing allotment.

In spite of the damage to public lands, which included the killing of several square miles of juniper and pinion forest, and the denuding of just as many square miles of scrub oak and brush, no cases were brought against the mines by the federal government.

In the early 1900s the discussions concerning smelter emissions began and ended with monetary damages. Collateral damage to the air, water and soil was never an issue.

The lawsuits continued through 1939, a year after the Clemenceau smelter shut down. The smoke quit in 1953 when the Clarkdale smelter closed.

Most of the farms became neighborhoods. Only a handful of ranches remain. What became of the sulfur and other toxins, after they had done their immediate damage to the landscape, is unknown.