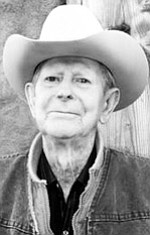 At age 14 he left home to become a working cowboy on ranches in southern California. He later served in the Army Air Corps during WW II. Upon completion of his service he went back to the life he loved as a cowboy. In 1945 he married Ann Cunningham Bennett.

Alan took his wife and stepson to Arizona in 1946 where he managed several cattle ranches throughout his career. After his retirement from ranching, he pursued blacksmithing where over the course of two decades became widely known for handcrafting authentic bridle bits and spurs. He received several awards and has been recognized in western publications for his craftsmanship.

He was preceded in death by his wife Ann.

He is survived by his stepson Richard Bennett, daughter-in-law Bonnie Bennett of Tucson, grandson Brad Bennett and great-granddaughter Sara Bennett of La Mirada, CA, and Doug Bennett of Bend. OR. Services will be held at Bueler's Funeral Home in Camp Verde on Wednesday September 3rd at 10AM.