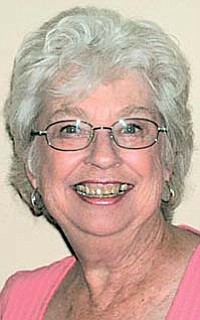 Standing guardian at the south end of the Village of Oak Creek and Big Park is an archaic remnant of the geological history of Red Rock country. House Mountain has its beginning at SR179 and hunkers westward to Page Springs, a distance of about seven miles.

From Oak Creek on the north to Beaver Head Flats Road on the south it measures another seven miles. Although irregular in shape, it stills covers approximately 37 square miles. Quite a chunk of ground!

Most folks driving along the Flats Road heading on to Cornville and Cottonwood are unaware they are passing along the remainder of a volcano that was active here after the area was an ancient sea.

Over millions of years mountains thrust up, eroded away, seas formed and disappeared -- while the continents collided and broke apart. Only recently has there been much interest in archeology and geology specific to Red Rock Country.

Sedona and Big Park not only straddle two county lines -- Yavapai and Coconino, they also straddle two geological provinces -- the Colorado Plateau and the Transition Zone (transitioning from the high plateau country in the north to Basin and Range country in the south). Its red rocks are related to the rocks of the Mogollon Rim.

Why are the rocks red? There is a thin coating of iron oxide (rust) on the outside of each individual grain of sand that makes up the rocks.

What about the volcano we call House Mountain? Most people would be amazed to learn that we here in the Village are living on the slope of a volcano. It isn't a dramatically erupting mountain like Mt. Fuji, but is rather a shield volcano. Shield volcanoes ooze very fluid lava for many miles in all directions when they erupt.

Some academics disagree and believe it is the remnant of a free standing cone. Intensive study of this mountain began only in the 1980s.

At first, it was believed to be about 5.5 million years old. But the mountain held a little mystery that belied this. More investigation revealed that House Mountain volcano lay beneath the ancestral Mogollon Rim. Lava flowed only to the east, south, and west.

The Rim blocked any lava flow to the north. As the Rim receded to its present location (it's still receding at the rate of one foot every 625 years) Big Park was formed.

Based on this information, it is estimated that House Mountain is about 14.5 million years old and is resting quietly.

Native American people called the mountain Big Eagle Mountain, and Big Park was called Big Eagle Valley. (If this area ever incorporates, Eagle Valley might be the least divisive name for it.)

Mrs. David Dumas is given credit for naming this mountain because she saw on its top a basalt structure that resembled a house, with a taller structure that seemed to be a chimney. Lightning later destroyed the chimney.

So take a look at House Mountain and appreciate it for what it is...a link to the ancient past.