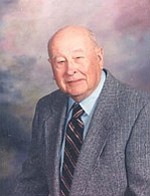 James L. Robeson passed away at the age of 85 on August 29, 2009 in his Sedona Arizona home. He was born on December 27, 1923 in Elizabethton, Tennessee to father W. E. O. Robeson and mother Addie. He moved to California when he was 16 and joined the Navy at the age of 18. Served 4 years during World War II where he was stationed in Okinawa. After the Navy he furthered his education at Fresno State University.

James had an affinity for business and opened up several shoe stores in San Diego county with his son James W. for 25 years. He then moved to Sedona, Arizona in 1997 where he enjoyed his retirement for the rest of his life.

James loved spending time with his family and friends humoring them with jokes. He had a passion for making people laugh.

He will be remembered as a loving and caring husband, father, grandfather and great-grandfather.

There will be a celebration of James L. Robeson's life on Saturday, September 12 in the Westcott Funeral Home at 10 AM. Pastor Steve Ruechel will officiate.