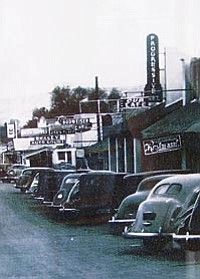 Today, we like to call Main Street in Cottonwood "Old Town." But before there were old and new Cottonwood areas, the river community found a niche in providing farm goods to the troops at Fort Verde and later produce for the Jerome mines. Still later, it played a role in movies and bootlegging.

The mining company and their employees avoided the river. Perhaps it was the mosquitoes near the water, still a plague at that time.

The community of Clemenceau, supporting the UVX mine in Jerome, brought thousands of people to the area near the current intersection of Willard Street and Mingus Avenue.

The story goes that Main Street was created when Charles Stemmer and Alanzo Mason used a mule team to drag through the brush.

It becomes part of the background after a while, but look at the shops as you drive by to see the stories there.

Arizona was among the first states to ratify the Nobel Experiment in 1920. But Arizonans were just as independent as they are today, and stills popped up across Yavapai County. Cottonwood was not free of the devil liquor either.

In fact, Cottonwood is reputed to have had the best whiskey makers for which people came for miles to partake.

In the early 1917, Arizona's Bootleg King, Joe Hall's prize whiskey still blew up, burning much of the Cottonwood Main Street. Since most of the buildings and homes were built of wood, a fire only meant rebuilding the town.

Cottonwood was feeling the effects of the good times promised by the United Verde Extension Smelter in Clemenceau. New buildings were put up rapidly with a variety of businesses.

The Jail (today, the Old Town Association's Visitor Center) was originally the county jail and still has a steel box inside that served as the cells. It was first built in 1929 and served the county sheriff until 1960 and then, after Cottonwood's incorporation, became a city jail into the 1970s.

Originally, it was said to have held bootleggers with as many as 12 packed sardine-style standing up into the small steel cage.

Joe Hall reportedly was the first inmate for 10 months after authorities raided his business and home.

The site of Hall's Rooming house has now been rebuilt a third time at 1004 N. Main. Reportedly, tunnels snaked beneath the business that allowed him to cart his whiskey out of town as far as California.

Stored whisky, hidden in the walls of the building exploded a second time in 1925. Hall's family home on Cactus reportedly was the only residence saved during that fire.

Cottonwood was called "The Biggest Little Town in Arizona." Pool halls and restaurants lined Main Street. But on the backside of the buildings, "speakeasies" dispensed the best whiskey in Arizona.

Many of the ceilings of the buildings were elaborately hammered tin. Recently, the city found that its Municipal Court building has the same hammered tin ceiling hidden beneath acoustic tile.

The restrictions in the company towns of Clarkdale and Clemenceau made Main Street desirable and popular after dark.

Lyons Park was first created in the 1930s as a mini golf course.

Slot machines and poker tables were in many stores until they were banned by the Legislature. When George Rufner was elected Yavapai County sheriff in 1928, he swept through Cottonwood targeting Joe Hall and his bootlegger company.

The Rialto Theater was the victim of the 1925 fire and was rebuilt up the street of poured concrete. That became the Oldest Operating Single Screen Theater in the U.S. until fire ravaged the screen and everything between the walls in 1998. Those cement walls remain, but today the former theater building is the Tavern Grille restaurant.

But, just as Old Town has seen several re-births due to fire, it also enjoyed the western movie industry that had its home for years in Sedona. Elvis Presley was in town signing autographs during the filming of Stay Away Joe.

Hundreds of films made in the area were shown at the Rialto. The last was the Rounders in 1964, starring John Ford and Henry Fonda. Other celebrities who passed through Cottonwood included Mae West in the 1920s and John Wayne and Gail Russell in the 1930s.

The stone bridges on either end of what we now call Old Town were public works projects built during the 1930s. The Cottonwood Bridge lies west of the Old Town Jail. The Del Monte Wash bridge is east of the Cottonwood Recreation Center. The Cottonwood Civic Center was built in 1939 as a WPA project. It became barracks for naval cadets during the war.

--Thanks to Karen Leff and The Cottonwood Hotel Self-Guided Walking Tour, the Old Town Association and the Clemenceau Heritage Museum.