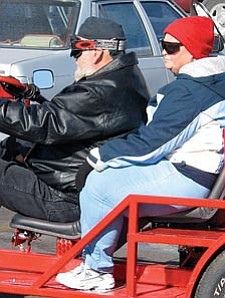 COTTONWOOD - It's been a while since motorcycle riders have been considered by the mainstream folks to be on the edge, like those shown in The Wild Ones or Easy Rider movies. More often today, they are better known for the benefits in which they participate. One of the biggest is coming up, and organizers hope that early reminders will swell the ranks of riders.

Every year in the Verde Valley, one group of riders makes special friends, especially among the young. They call it the Verde Valley Toy Run. It brings joy to youngsters who might not otherwise share in the joy of Christmas at all.

For 24 years, bikers have made a run circuit around the Verde Valley. Proceeds from entrance fees, raffles and other fund-raising events along the way provided toys and canned goods to supported the needy.

This year is the 25th running. The anniversary is important, but there will be some changes in the operation this year and a change in the organization.

With the economy in a shambles, last year's run was a disappointment. The run had been supporting several programs and did not live up to its own expectations.

"The best we can figure is there are about 1,500 kids in the Verde Valley assisted through this program," Papa Dave Treadwell said.

"We did fine on the toys," said Treadwell, who has organized the run for years, "but there is never enough to go around. That's what the cash donations are for.

"The raffles were down and that is where the extra money comes in. And major donors - we didn't have them last year. The 50-50 raffle split grossed only $74 and there were 200 T-shirts left over which usually sell well.

He is cautious about this year's expectations but hopes some slight uptick in the economy will reflect in a more successful run for the Verde Valley kids' Christmas.

Papa Dave, who also works at the Friday night feeding in Cottonwood's Riverfront Park, says there are more people each week at the 6 p.m. meal at the pavilions.

And after years at its helm, Dave is bowing out of the run this year.

The history behind the run is that it was originally started by Rose Ortiz, who operated a mobile food service. She and Jeff Thomas organized the run for 12 years. Papa Dave took over the organization a year after moving to the area. Now, it is changing hands again.

This year, Dave was told that he had suffered a couple of "mini-strokes' or TIAs and was advised he needs to unload some of his responsibilities and take off the stress. He has also been active as a hospice chaplin and a minister and works with other events around the community.

Lance Spear, who worked with Healthy Families in the past, a sponsor of the event, is now taking over reigns of the operation.

Lance has co-chaired the run with Dave for several years. "It has always been a passion to me, I want Christmas to be joyful for every family."

"The recession was just kicking in last year and we had 300 riders instead of the usual 500. The economic times will still be tough, but we hope that this year's run will be up again."

Catholic Charities develops a master list of children in need of the program every year. This year, the food bank is also involved in helping out.

But, the organizers say, the riders are the real heroes of the run. They pay their entrance fee of $20 and some get other sponsors. "One guy in the past raised $700 by himself," according to Lance.

"It's also plenty of fun. Santa Claus rides through town on the back of one motorcycle. Some folks will still drop off toys even though they may not run. Everybody gets involved."

The entrance fee is $20 plus one new unwrapped toy, usually worth $10 or less.

Participants received T-shirt in the past, but this year a commemorative pin will be cast. There is a "poker run."

A biker and hot rod parade leaves Wal-Mart about 10:30 a.m. and parades through Old Town, Clarkdale and back to Cottonwood. The route from there will stop at selected spots throughout the valley before returning to the Verde Valley Fairgrounds.

The public is invited to come to the Verde Valley Fairgrounds on 12th Street for an afternoon of biker fellowship 12:30-6 p.m.

Admission for non-riders is one new unwrapped toy and one can of food for the local food banks per person. At the fairgrounds, there will be various vendors, music, raffles and a bike and car show.