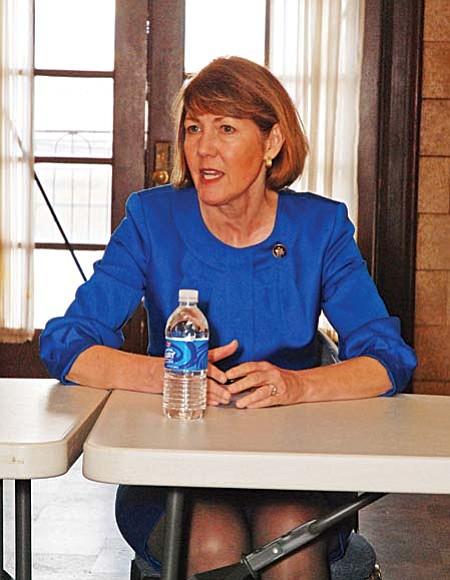 Dist. 1 Congessional Rep. Ann Kirkpatrick announced before a cheering crowd at the Sedona Community Fair Sept. 19 that she would begin the process of finalizing the legislation for a proposed Red Rock National Scenic Area Designation.

Dist. 1 Congessional Rep. Ann Kirkpatrick announced before a cheering crowd at the Sedona Community Fair Sept. 19 that she would begin the process of finalizing the legislation for a proposed Red Rock National Scenic Area Designation.

With the continuing pressure of development in the state, residents and visitors alike have been working to remind Congresswoman Kirkpatrick of her campaign promises to introduce the bill.

Recently, a standing-room-only crowd filled the Sedona Elks Club to voice its support for the proposed NSA.

The Big Park Council, at a separate packed-room meeting with much discussion on the issue, overwhelmingly reiterated their support for the special designation.

It has also been endorsed by the Yavapai County and Coconino County Boards of Supervisors and twice by Sedona City Councils.

The present forest plan (Amendment 12) prohibits any exchange of these lands for parcels outside the specified area. Forest lands in the area may only be exchanged for private lands in the area.

However, forest plans may be changed, and the present plan is in the process of revision. To make the current land exchange policy permanent requires a Congressional designation of the area. This means passing legislation in the U.S. Congress to achieve this goal.

Many residents of the area have worked for years in support of an NSA. The impetus for the present NSA proposal was the Jack's Canyon land exchange in 1992 in which the Forest Service gave up 190 acres in the Big Park area.

Three-thousand petition signatures were gathered to protest the exchange,

In 1993, the Forest Supervisor said it was time to redo the forest plan for the Sedona area to reflect the recreational use of the area.

From 1994 to 1998 there was tremendous public involvement in the forest planning process from our local people, resulting in the creation of the current restrictions on land exchanges which are included in the 12th Amendment to the Coconino Forest plan.

The proposed legislation further states that there is no effect on local government abilities to work with the forest service to resolve any local infrastructure and land use issues that involve national Forest System land in the area.

Now, it is time again to praise Ann Kirkpatrick for her actions regarding the NSA and encourage her to work diligently toward its early passage.