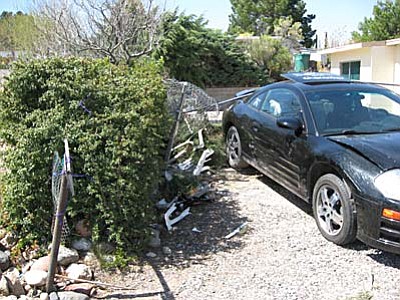 Investigators say this 2003 Mitsubishi Eclipse traveled through a chain link fence in the yard. The vehicle struck one car and then pushed that car into a mini-van. Uidenich remained trapped beneath the vehicle during the entire incident and was pronounced dead at the scene.

Uidenich was visiting his daughter and sitting in a chair in the yard of her home on Grand View Drive in Verde Village, according to the Yavapai County Sheriff's Office.

At about 11:30 a.m., a 17-year-old neighbor was pulling his 2003 Mitsubishi Eclipse into his driveway when he said he had equipment failure and lost control of the vehicle. The car, instead, drove through a hedge and into the yard where John Uidenich was sitting.

That yard lies lower than the intended driveway, and the car dropped three feet into the yard, landing on the 58-year-old Uidenich, trapping him beneath the car.

The vehicle continued to travel through a chain link fence in the yard. The vehicle struck one car and then pushed that car into a mini-van.

Uidenich remained trapped beneath the vehicle during the entire incident and was pronounced dead at the scene.

The young driver was detained and interviewed by a Drug Recognition Expert (DRE) and submitted to a blood test and results are pending. Initial reports indicated no evidence of alcohol or drug influence involving the teen.

The driver's vehicle was impounded to allow further investigation into alleged mechanical issues. At this time, no charges have been filed pending results of the investigation.

John Uidenich retired in 2008. He had been a successful golf coach, teacher, bus driver, mentor, tutor, and club advisor at Mingus.

"I knew John very well. He was very kind and gentle. He was somewhat shy, so not everyone got to know him."

"He loved kids and would do anything for kids.

"When I was principal, then superintendent, he was very loyal and would do anything asked of him, whole-heartedly. At the same time, he always had a very disciplined classroom."

"I don't know how many times I observed him in his class. He was consistently fair and gentle."

"He was a really great guy," remembers John Christiansen, another Mingus veteran who worked as counselor, principal and in other senior positions.

"He loved Mingus and the kids," he said of Uidenich.

"Kids always called him, 'Mr. U' and the athletes called him 'Johnny U.' It wasn't disrespectful and he didn't mind.

"He did whatever Ron Barber asked, he worked in technology, merchandising management, he established the Mingus store, whatever the job, he was willing to do it."

"The kids liked him and he always had kids in mind. He even drove buses just because he liked being around kids."

"For many years, I was athletic director at Mingus and asked John to coach softball and baseball. He said, 'I don't know much about it, but I am willing to do it.' He had many winning seasons and won lots of softball games. In 1990 his team won state and then coached 17 more years."

"It's really sad. He retires one year and is killed a year later."

Uidenich began coaching golf in 1987 when his team would practice at the old Peck's Lake course, which at the time was the oldest golf course in Arizona.

Uidenich's golf teams had many successes. One of his outstanding student golfers was Marty James, who began playing golf with his father on the old Verde Valley course in Clarkdale. James went on to compete for Oregon State and on the amateur circuit,

During his four years at Mingus High School, the Marauders won four consecutive Grand Canyon Region championships and one state championship, and James became the Arizona state champion his junior year. He would also compete against Tiger Woods during summer PAC-10 tournaments.

When he looks back at his high school career, James is quick to credit the mentorship of Coach John Uidenich.

"Mr. U made things fun and exciting," said James. "For me, he relaxed me and I really enjoyed that. As golfers, we tend to over-analyze things. He made it fun."