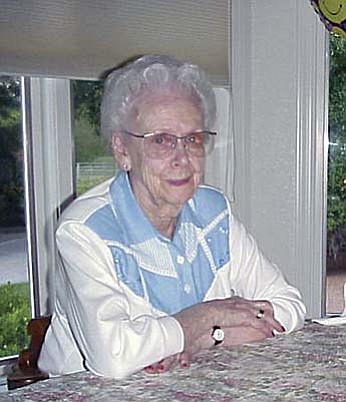 Mary was born in Racine, Wisconsin on April 28, 1915 to Arthur William and Edna (Hare) Simonson. On August 14, 1937, she married Stedman J. Kosterman who preceded her in death on October 28, 2003  Mary and Sted were residents of Racine and Kenosha Counties over the years until 1995 when they pulled up roots and moved to Cottonwood, Arizona to live with their daughter and son-in-law, Lynn and Scott.

Mary is survived by her daughters Mary “Gail” (Paul) Kruppstadt of Rcine and Lynn Kosterman of Cottonwood, very special nieces and nephews and her “granddogs”, Abbey, Becky and Katie.

Besides her parents and husband, Mary was preceded in death by her son-in-law, Scott Long, a brother William Simonson, and sister Nancy Barkley.

Internment will be at West Lawn Cemetery in Racine, Wisconsin after an Episcopalian graveside service.